Pupils at an Aberdeen City Council school took part in a rap along with City Wardens and Environmental Health staff as part of an education session about why people should tidy dog mess.

The specially-written rap is performed by the City Wardens and staff from the City Council's environmental health department along with Scoop the Dog, a character who helps with the ScoopWatch education sessions.

They have gone around dozens of schools already in Aberdeen, and were today at Broomhill Primary School.

She said: "The pupils really enjoy learning the rap and singing it, and it reinforces the messages about dog mess in an easy-to-understand way. 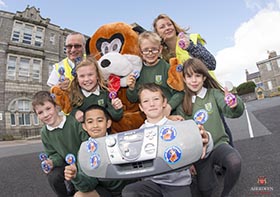 "Scoop the Dog is a popular visitor at schools and the feedback we get is that pupils really enjoy the sessions and take the messages home with them."

The rap was written by one of the senior City Wardens, and was put to music and sung by Portlethen Academy pupils.

He said: "The City Wardens and environmental health staff do a fantastic job at going around the schools and educating the pupils about the problem of dog mess.

"We've had great feedback from communities where ScoopWatch has been held at schools in their area, so it shows that schemes like this do make a difference."

Pupils who have taken part in ScoopWatch can also take part in a creative writing competition, with the winner getting a VIP day at Aberdeen Football Club's grounds at Pittodrie.