School pupils have been sharing their views on proposals to showcase Aberdeen's landmarks, civic spaces and streetscape using creative lighting.

Dozens of pupils shared their views on the best ways to illuminate the city centre.

More than 700 people have already completed the project survey, which closes on Sunday.

The survey presents a range of lighting treatments for different themes – including “Unique Aberdeen” and “A Welcoming Destination” – and asks the public to choose their favourites.

After completing the survey, Mia Swinton, 11, a pupil at Middleton Park Primary, said: “There are lots of really good ideas for lighting Aberdeen.

“I enjoyed doing the survey because it would be good to know, as an adult, that I’d had a say in developing our city.”

Chris Aikamhenze, 14, from Harlaw Academy, said: “The ideas look very exciting and I hope they will be delivered.

“This could attract more tourists to the city.”

The project is being brought forward by Aberdeen City Council and leading North-east business organisation Aberdeen Inspired, the banner under which the Business Improvement District operates.

Feedback from the survey will be used to help draw up the strategy and an implementation plan, which together will go to Councillors for consideration early next year.

Councillor Marie Boulton, Aberdeen City Council’s lead on the City Centre, said: “Aberdeen in Colour appears to have caught the public’s imagination and that of our youngsters too.

“The City Centre Masterplan presents a long-term vision for Aberdeen, so it’s critical that children and teenagers are involved in shaping projects as they come forward.

“I hope everyone will follow their example and have their say before the survey closes on Sunday.”

Adrian Watson, chief executive of Aberdeen Inspired, said: "We are delighted that things have moved at pace to the engagement stage, and hope the strategy will deliver cutting edge creative lighting in our great city centre in the not too distant future." 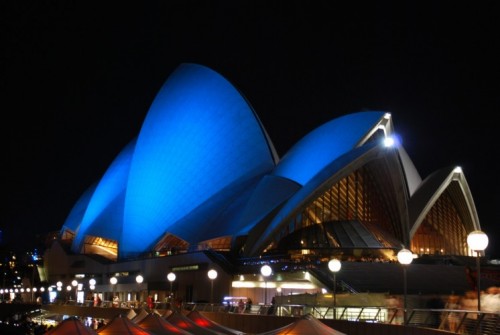 Award-winning consultancy Steensen Varming were appointed to develop the strategy after a competitive tendering process. The firm have designed lighting for several World Heritage Sites, including Sydney Opera House (above).

The survey can be found here.