Work to start next year on transformational project

Aberdeen’s pioneering approach to placemaking took a major step forward today after councillors approved a development programme for a new residential quarter in the heart of the city.

The vision for Queen Street – as set out in the City Centre Masterplan – would deliver more than 300 homes and incorporate a civic hub, cultural assets, enhanced heritage features and high-quality public realm.

It also agreed to bring forward a Full Business Case for a new mortuary, earmarked for NHS Grampian land at Foresterhill, to replace the outdated facility on Poultry Market Lane next to Queen Street.

A brief setting out the aspirations for the type and quality of the housing as well as the streetscape and green space is being drawn up. Proposals will be sensitive to buildings of special architectural or historic merit. 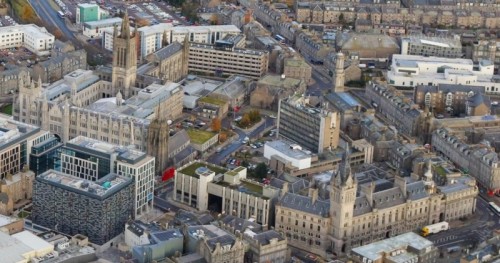 A report for the committee also described the reform of public sector services as a key principle of Queen Street’s regeneration.

A Multi-Agency Transformation Management Group, co-ordinated by the Council, is exploring ways to redesign services around the community to help deliver the city’s refreshed Local Outcome Improvement Plan.

Outcomes range from reducing anti-social behaviour to healthier living to increasing the number of people employed in the digital sector.

Police Scotland’s current base on Queen Street is nearing the end of its useful life and the organisation has announced it is working with the Council on the potential for co-location and service integration within Marischal College and elsewhere.

Prevention and early intervention – through the sharing of skills and knowledge – could help manage demand, reduce the risk of harm, and lessen inequalities.

A proposal to fund a new Aberdeen Justice Centre through the redevelopment of Queen Street is no longer considered viable, and the Scottish Courts and Tribunal Services is to assess the feasibility of consolidating existing court activity within the Town House.

With the Arts Centre, Lemon Tree and Marischal East (including Anatomy Rooms and City Moves) on site, and Peacock Visual Arts nearby, the Queen Street plan could galvanise the culture offer, promoting enterprise, employment and community cohesion.

The committee heard that the project’s next steps will involve further consultation with stakeholders, land assembly and site investigations.

Aberdeen City Council is leading the most significant transformation in the city’s history through its ambitious capital programme.

This year the redeveloped Aberdeen Art Gallery re-opened and The Event Complex Aberdeen (TECA) was launched. Union Terrace Gardens is being revitalised and Provost Skene’s House is being redeveloped as a contemporary visitor attraction.

Work to start next year on transformational project