Plans to celebrate the way people from Aberdeen helped transform the wider world have taken a major step forward – as part of a City Centre Masterplan project.

Provost Skene’s House – which is being renovated – will tell the story of entrepreneurs, inventors, scientists, artists and sportspeople whose influence extended far beyond the North-east. 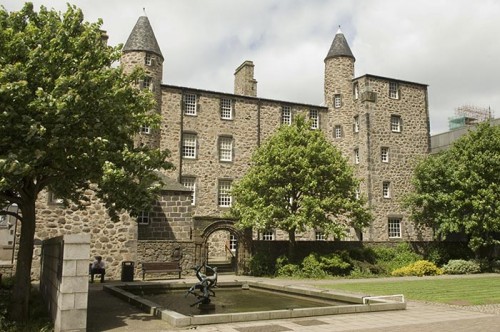 A list of potential candidates has been drawn up with the guidance of a steering group, which included representation from the tourism, cultural, academic and business sectors.

The final line-up will depend on a number of factors, including space and available exhibition material, and won’t be decided until early next year.

However, the names of six people who will feature – such is their importance – has been announced [details below]. They range from astronomer Sir David Gill, who mapped the stars, to Nobel Peace Prize winner Lord John Boyd Orr, who helped establish the city’s Rowett Institute.

The criteria allows for those who were born or lived in the North-east, with more than 60 people expected to be included.

When the full line-up is determined, the public will be asked to vote for those who should be admitted to a “Hall of Heroes” on the ground floor, an exhibition element that will be regularly refreshed.

Aberdeen City Council leader Councillor Jenny Laing said: “The City Centre Masterplan will help safeguard Provost Skene’s House for the future while broadening its appeal – and I for one can’t wait to see the final list.

“Over the centuries people from Aberdeen and the North-east have transformed not just the city and region but the world.

“Some of the line-up will, I’m sure, be very well-known, but I expect there will be others whose name and contribution will prove surprising for locals as well as visitors.”

A total of £1.5 million of City Centre Masterplan money is being used to renovate and redesign the Flourmill Lane building, which dates from 1545.

Around £1m will be spent on the design and fitting out of the new interpretation centre, which is expected to include digital interactive and audio features while drawing on material from Aberdeen Art Gallery and Museums collections and the City Archives.

The remaining £500,000 will go on essential building works.

Muse, the developer behind the neighbouring Marischal Square office complex, has already spent £125,000 to protect the House and is making a further £375,000 available, bringing the total spend to £1.875m.

Deputy Leader Councillor Marie Boulton said: “The City Centre Masterplan promises to enhance our heritage and improve our cultural offering – and the vision for Provost Skene’s House will do just that.

“The new exhibition should prove to be a major educational resource as well as drawing visitors to our city.”

Lyndsey Bowditch, director of Studioarc, the consultancy working on the exhibition, said: “We have some great stories to tell.

“The next step for us is to work with the list to research the individual people and identify the final selections based on how we might start to develop the content for the displays.

“We will also be working to identify objects, loans and material for display. We would hope to be able to share a list of the final line up of people in the New Year.”

Provost Skene’s House was closed to allow for the construction of the Marischal Square, of which it will be a focal point. Both are scheduled to open in July 2017.

The House was named after one of Aberdeen's most famous residents, Lord Provost George Skene, who is thought to have commissioned the carved plaster ceilings.

Before it closed, the building housed a series of period rooms, furnished to show how people lived in the 17th, 18th and early 19th centuries.

Mapping the stars and photographing the moon…

David Gill was born in Aberdeen, the son of a clockmaker. Although he joined the family firm his interests lay elsewhere and in 1874, Gill joined the expedition to Mauritius to observe the transit of Venus. He flourished as an astronomer and is best-known for his measurements showing the distance of the Sun and other stars from Earth and for his early use of photography to map the stars.

He is credited with taking the very first photograph of the moon in 1868 and of the Great Comet in 1882 whilst working as Astronomer Royal in the Royal Observatory in Cape Town, South Africa.

Mary Garden was born in Aberdeen and gained world-renown as an operatic soprano. She first rose to fame in Paris where she became the leading soprano at the Opéra-Comique. In 1907 she joined the Manhattan Opera House in New York and two years later she was a household name in America.

Garden later became the director of the Chicago Civic Opera and appeared in several silent films by Samuel Goldwyn. Although she spent much of her life in France and America, after she retired Garden returned to settle in Scotland.

Thomas Blake Glover was posted to China from Aberdeen when he was 18 years old. Three years later he moved to Nagasaki, Japan. Glover was responsible for commissioning one of the first warships in the Imperial Japanese Navy the Jo Sho Maru, which was built by Alexander Hall and Company in Aberdeen and launched on 27 March 1869.

Glover became a key figure in the industrialisation of Japan, helping to found the shipbuilding company, which later became the Mitsubishi Corporation of Japan and introducing the first steam railway locomotive, the Iron Duke, to the country in 1868. Glover was awarded the Order of the Rising Sun by the Japanese government in recognition of his distinguished achievements.

Helping babies find safe passage into the world across the globe…

Born in Aberdeen, Margaret Myles became a midwife after the deaths of both her husband and young child. She travelled and worked in Canada and America, but returned to Britain to take on the role of midwifery tutor at the Simpson Memorial Maternity Pavilion in Edinburgh. She worked tirelessly to train and educate midwives, whom she saw as crucially important in lowering infant mortality rates. In 1953 her Textbook for Midwives was published and is still used today by trainee midwives. During Myles’s lifetime ten editions of the textbook were published and it was translated into five languages, including Japanese.

Revolutionised travel with the pneumatic tyre…

Born the eleventh of twelve children of a woollen mill owner in Stonehaven, he taught himself chemistry and astronomy with the help of a local weaver. His father gave him a workshop where he set about improving his mother's household devices. Thomson went on to work with an Edinburgh firm of civil engineers and devised a new method of detonating explosive charges by using electricity. This invention greatly reduced the loss of lives in mines throughout the world.

When he was just 23 years old, Thomson patented his revolutionary design for the pneumatic tyre, which he demonstrated in London's Regent Park in 1847.

A Nobel Prize winner who helped improve the world’s health…

Boyd Orr is remembered as one of Britain’s leading experts on nutrition who was instrumental in raising funds to establish the Rowett Institute at the University of Aberdeen. Boyd Orr spent much of his adult life campaigning for better nutrition both nationally and internationally.

In 1945 Boyd Orr was elected Director-General of the United Nations specialised Food and Agriculture organisation, arguing that food and prosperity for all people on Earth led to peace. During his lifetime he participated in the League of Nations to achieve an international policy of nutrition. He was awarded the Nobel Peace Prize in 1949.