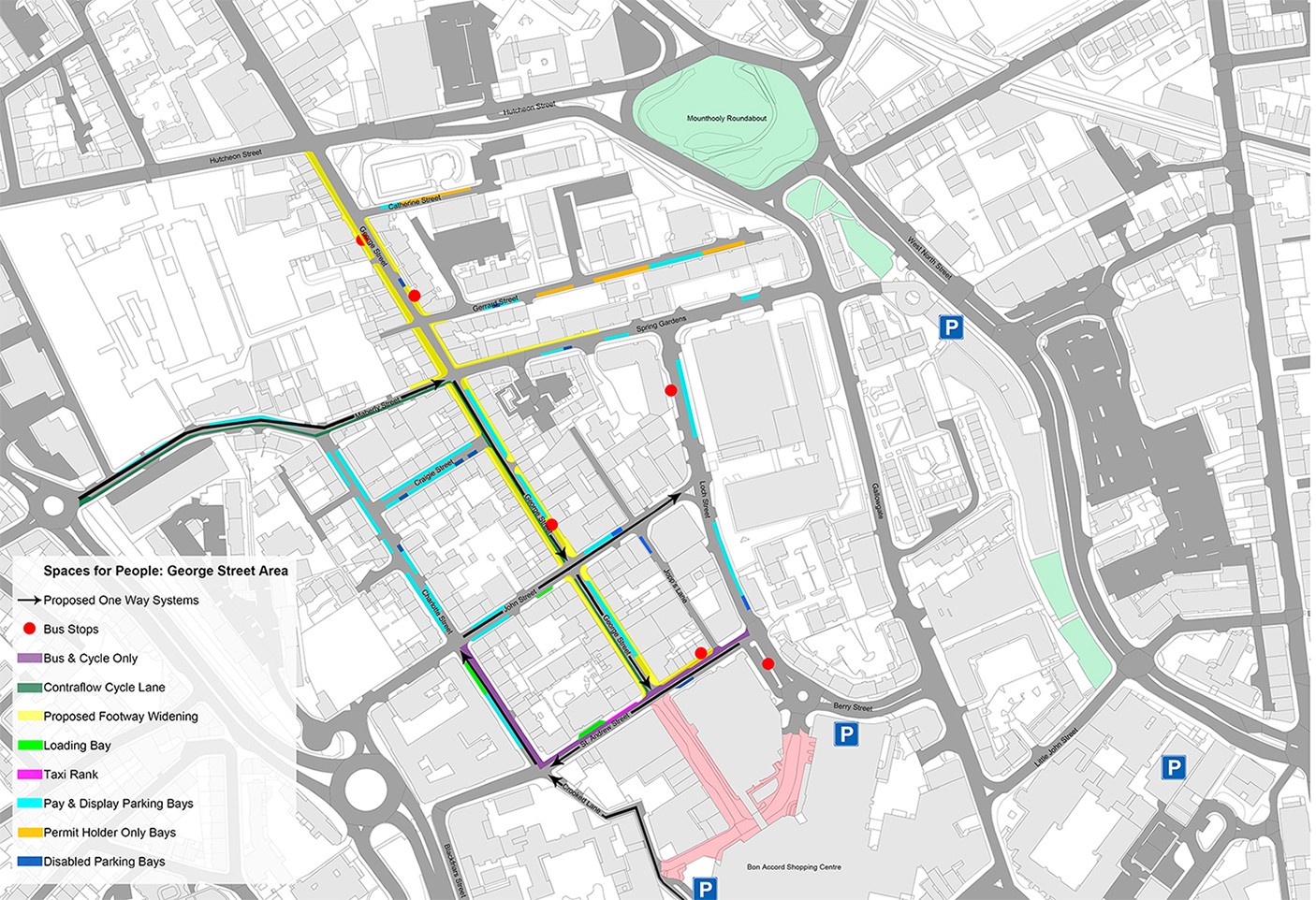 People queuing and walking about in the George Street area of Aberdeen will have more space to physically distance as work is due take place next week on a temporary scheme to change roads and pavements.

The project, which is part of a national strategy to create walking and cycling spaces in towns and cities across Scotland, has been designed following feedback from local councillors, businesses and stakeholders.

Aberdeen City Council was awarded a ringfenced £1.76million grant from the Scottish Government’s Spaces for People fund, and measures taking place in several locations around the city include temporary pedestrianisation, pavement widening, bike lanes, and one-way travel. The measures will support local shops, cafes, bars and restaurants and the local economy as people will be able to queue safely while physically distancing.

The work for the George Street area includes:

Aberdeen City Council transport spokesperson Councillor Sandra Macdonald said: “It’s great the works in the George Street are starting as we’ve been working with the George Street Traders’ Association, the local community council, and local councillors on the plans.

“The measures we’re putting in may be modified again as we continue to speak with these groups and local residents, to gauge how the arrangements work when people continue to return to the area for shopping and leisure.

“Many people already walk and cycle in the area, going to the local shops or on their way to the city centre. These interventions will enable pedestrians to physically distance and help prevent the spread of coronavirus, while at the same time support the local economy as lockdown eases.”

George Street Traders’ Association chairman Stuart Milne, who is general manager at Finnies the Jewellers, said: “Whilst all would clearly not welcome the temporary traffic interruption in George Street to facilitate necessary social distancing, I believe we have to consider it necessary to enable businesses to open up once more to get the local economy moving again.

“As general manager of Finnies, I personally have marshalled customers at the door of the shop to enable customers to enter the store safely in accordance with our health and safety risk assessment to ensure our arrangements are safe for both staff and customers.

“On several occasions, I stepped off the pavement into the road to allow the safe passage on the pavement of passers-by, elderly, mothers with prams and disability scooters. I should not be asking staff members to do this when there is risk of being knocked down by a vehicle.

“We have to welcome the initiative with the narrow pavements in George Street and look forward to customers feeling safe in these surroundings to return to visit some of the amazing businesses we enjoy in the George Street area.”

Advance signs highlighting the changes and restrictions are also being put out letting people know about the changes in the area.

Similar works, where traffic is re-routed to free up carriageway space for businesses, pedestrians, cyclists and public transport users, have already been carried out on Union Street and nearby streets, and in the communities of Torry and Rosemount.

The works being carried out around Aberdeen will help protect public health by reducing COVID-19 transmission in the city which will in turn reduce the number of cases NHS Grampian’s contact tracing team have to cope with, making their intervention easier and more effective. The temporary measures will further help the economic recovery of the city and allow people to continue to use active travel such as walking and cycling.

Aberdeen City Council will continue to review, monitor, and evaluate the interventions while discussions are held with stakeholders, and when the measures are in place. The continual reviewing may mean changes to the interventions, and it is also a requirement of the fund, which is being administered by sustainable transport body Sustrans Scotland.

The length of time the temporary measures will be in place will be determined by NHS and Government guidance for physical distancing.