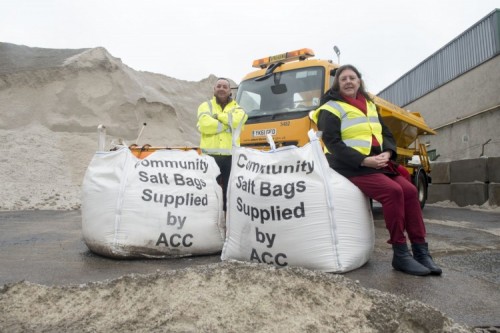 A stockpile of 12,000 tonnes of salt, around 180 staff, almost half of the city’s roads treated before 7.30am and the facility for the public to track gritters online are just some of the features of Aberdeen City Council’s latest winter maintenance programme.

The Council today (7 October) launched the 2019/20 campaign and outlined priorities for gritting roads and pavements, details of planned operations and how much grit/salt is in stock.

A budget for winter and emergencies of £1.523million has been approved to ensure that the city keeps moving. The full funding allocation may not be used or can be supplemented, depending on the severity of the winter.

Early morning and standby gritting operations start on 11 November and will run through to 15 March. Operations will be extended depending on road conditions and if forecasts are showing wintry weather.

Almost half (47%) of Aberdeen’s roads will be treated before 7.30am under the plans, with 590 miles of roads in the city - more than the distance from Aberdeen to London.

Weather forecasts are closely monitored throughout the day and night, and gritters and ploughs can be out 24/7.

For the first time residents will be able to track road gritters as they drive around the city. The tracker will be available at: www.aberdeencity.gov.uk/winter.

Aberdeen City Council transport spokesperson Councillor Sandra Macdonald said: “Every year our dedicated staff go above and beyond their duty to help people while doing their best in often difficult winter conditions.

“Our early morning gritter drivers are usually driving to work themselves on untreated roads before they start work at 4.45am to ensure the main roads are gritted for most people as they start their day.

“As always, we’re hoping for a mild winter but of course the Scottish climate always means there’s a possibility of snow and ice which can last for long periods.

“We cannot be everywhere around the city at the same time and ask residents to be prepared themselves by carrying out journey planning, ensuring they have the right equipment for their journeys and having an alternative plan for transport if possible.

“We want to keep roads open and residents safe and I’d encourage people to look up information on our website at www.aberdeencity.gov.uk/winter, keep a close check on weather forecasts, plan appropriately and adhere to police and travel advice.”

The primary routes which are treated first are the main transport routes through the city and include major bus routes, roads at Aberdeen Royal Infirmary, and roads near fire stations. The primary routes make up almost half of Aberdeen’s roads network and are never impassable unless there are abnormal conditions. These are gritted early morning from 4.45am to 7am as the early morning gritting operations, to ensure they are salted before rush hour.

The primary routes are pre-treated and there is 24/7 availability of equipment and crews. The 10 primary routes can be viewed at www.aberdeencity.gov.uk/winter.

The secondary routes comprise significant through-routes in communities and are treated only once the primary roads are open to traffic. Roads that carry medium traffic flows or give access to community or public facilities of a non-urgent nature and secondary routes on higher ground are usually a priority.

Secondary routes include roads near sheltered housing and social work properties, near schools where possible, cemeteries and crematoria, shopping centres, and access to facilities in parks and gardens.

The other roads are all other routes which are not normally treated unless emergency vehicles require access, there is a medical emergency or funeral, and they include minor roads where road users can make their way to the nearest higher priority route, local access roads and cul-de-sacs.

The priority 1 pavements, which are highly used, are in the city centre and include two routes. The other pavements include all other footways which are treated on area basis, with a priority given to high usage and public facilities or access. Cycleways are treated as priority 2 footways.

More information can be found at www.aberdeencity.gov.uk/winter.