An amendment has been made to the detailed planning application to revitalise Union Terrace Gardens (UTG) in response to representations received during the planning consultation period.

Refinements made by LDA Design reduce the potential impact on any future development of the adjacent railway while addressing concerns raised by Historic Environment Scotland about the proposed Union Street building’s appearance and relationship with the existing streetscape.

The amendment, which is being submitted by Ryden on behalf of LDA Design, was published online today by Aberdeen City Council for the public and interested parties to view and make formal comment on.

Neighbours and stakeholders are being notified about the amendment, which includes adjusting the position of the Union Street/Union Terrace building (below) and realigning the walkway from Union Bridge. 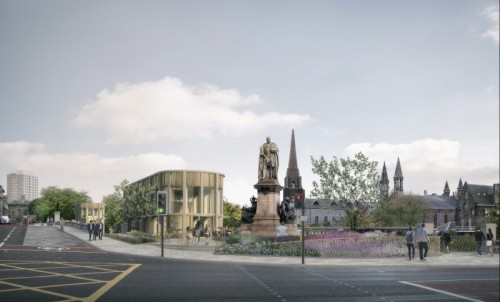 Plans to revitalise Union Terrace Gardens under the City Centre Masterplan were approved in principle in March 2017. The detailed planning application for UTG was submitted in April 2017 and is awaiting determination. If approved, a programme of works will be drawn up.

An Aberdeen City Council spokesperson said: “The detailed design has developed in response to feedback from officers and external bodies, which is not unusual for a significant planning application.

“At the same time, it continues to honour the key design principles which were supported by the public and backed in principle by Elected Members.

“We would encourage the public and stakeholders to study the amendment and to make fresh representation to the Council should they wish to.”

The statutory consultation period for making representation on the amendment runs for 21 days.

* The amendment can be found here.