A second specialist deep clean of Union Street was under way today as part of regeneration work under the City Centre Masterplan.

The first phase of Operation Union Street Rejuvenation, launched last September, has included the upgrading of street furniture and the creation of a dedicated team to keep the thoroughfare in top condition.

Union Street has recently been basking in the spotlight.

The refurbished Capitol building – a joint venture between Aberdeen-based Knight Property Group and M&G Real Estate – has been named best office development outside central London by the Office Agents Society and Commercial Workplace of the Year by British Council for Offices in their Regional Awards.

Aberdeen City Council leader Councillor Jenny Laing said: “We are delighted that the confidence shown by developers is bringing success. Under the City Centre Masterplan we are breathing new life into the heart of Aberdeen and helping to create the conditions for continuing prosperity.

“The hard work undertaken by Council staff and our partner Aberdeen Inspired signals our commitment to regeneration in the long term through the Masterplan, and this has been a factor in increasing confidence and pride in the city centre.

“There are plenty of reasons to be optimistic about the future of Union Street – not least the fact major businesses are making their home there.”

Phil Kirk, Chief Executive Officer at Chrysaor, said: “Our move to The Capitol is a positive step for Union Street and the wider Aberdeen area, and directly supports the direction of Aberdeen City Council’s City Centre Masterplan.

“The increased footfall on Union Street will bring increased opportunities to businesses within the West End and further strengthen regeneration within the area.” 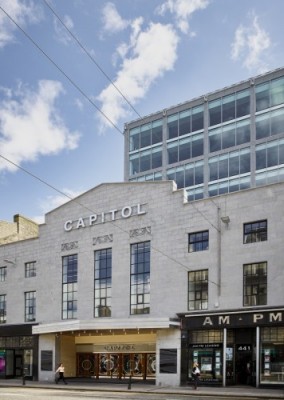 Operation Union Street Rejuvenation is being co-led by Aberdeen Inspired, the operator of the Business Improvement District.

“The deep cleans of Union Street are making a tremendous difference and shows what can be achieved. This is a good start but we all understand it is crucial we deliver on the many other strategic aspects of the City Centre Masterplan.

"There is a real sense of optimism growing around the city centre and Aberdeen Inspired is committed to continue working with others to foster this further.

“We want to drive forward enhancements to Union Street, and the city centre, and it is great to see this becoming a reality through our partnership with Aberdeen City Council and many others.”

The next phase will include repairing and preserving key buildings on Union Street as part of a Conservation Area Regeneration Scheme, the Council having secured and matched an award of £1.2 million from Historic Environment Scotland.

The Masterplan vision involves bringing back into use more vacant and underused historic buildings on Union Street, with improved public realm and pedestrian priority between Bridge Street and the Castlegate in the longer term.