Council leaders today (August 12) hailed the transformation of Union Terrace Gardens (UTG) as “history in the making” as the works programme was announced.

A ceremonial turf-cutting was held ahead of construction getting under way on the £25.7 million Aberdeen City Council project on 9 September.

First steps will involve closing off a slip road that will become the site of one of three new pavilions and improving drainage in the Victorian park, which opened in 1879.

Council Co-Leader Councillor Douglas Lumsden said: “In transforming Union Terrace Gardens, we are making history in the heart of Aberdeen.

“This is an enormously exciting time for the city as we increase our cultural, heritage and tourism offer and enjoy all the economic benefits that brings.

“P&J Live has just opened, the redeveloped Aberdeen Art Gallery will follow in November, and with UTG we are about to embark a project that will further electrify the city centre.”

Fellow Council Co-Leader Councillor Jenny Laing added: “Union Terrace Gardens is among the city's best loved places and it was vital we got this project right in every detail.

“That takes time – but it has been time well spent and we are about to be rewarded for the hours of extensive community consultation and diligent design work.

“The sympathetic regeneration of Union Terrace Gardens will ensure it remains a unique and enduring feature of our city centre, accessible for all to enjoy, and the start of work is another sign of the momentum building throughout Aberdeen during a period of incredible transformation.”

Councillor Marie Boulton, Aberdeen City Council’s culture and City Centre Masterplan spokesperson, said: “We are taking all that’s wonderful about Union Terrace Gardens – its setting, its greenery, its heritage – and enhancing that.

“The design is a direct response to how people wanted their city to evolve. That we are ready to start work is truly momentous, not just for this generation but in terms of legacy.

“The changes to the build environment in Aberdeen are dramatic – but it’s also bringing a real shift in the cultural outlook of residents and the outside view of the city, with visitors embracing all we have to offer and the plans we have for the future.”

Award-winning consultancy LDA Design engaged with the public and stakeholders in developing the UTG plan, which won strong support before being approved by Aberdeen City Council last year. 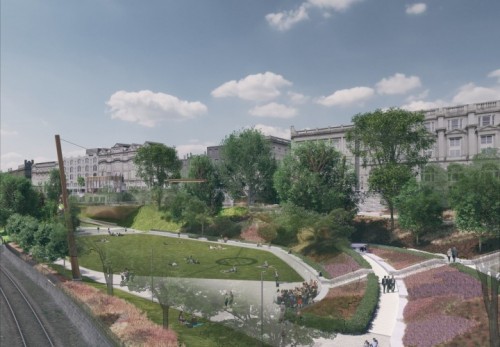 Features of the flagship City Centre Masterplan project include:

Since their appointment in April, Balfour Beatty – the construction contractor – has been working off-site to finalise the design and detailed programme for the two-year build and that work has continued over the summer.

On 26 August a permanent “stopping up” order will close the length of Union Terrace that has acted as a slip road for vehicles turning left from Rosemount Viaduct. It will come into effect the day after the Great Aberdeen Run, which utilises the road for support services.

Prior to then engagement events will be held to ensure stakeholders, local businesses and the public have the opportunity to find out more about the programme.

Balfour Beatty will take possession of the site on 9 September and anticipate a six-week period of site set-up and additional survey work. Hoardings will be erected around the perimeter of the site. The works, some of which are weather dependent, are expected to be completed by summer 2021.

The first phase of construction will include the addition of a permanent safety structure on Union Bridge.

Watch the video of the turf-cutting ceremony.