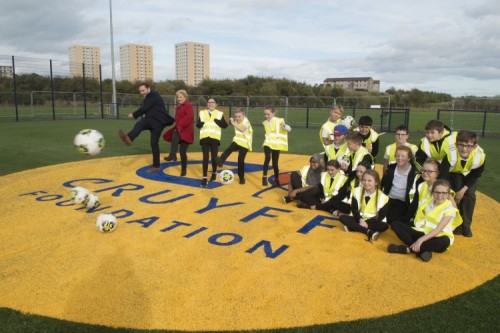 Tullos Primary School pupils made their first trip to Cruyff Court Neale Cooper today as final preparations are made for the opening of the new £300,000 community facility.

Construction is on course to completed early and local children were given a site visit to sample the court following a classroom session with the Denis Law Legacy Trust’s Streetsport team and the project architect. The facility will be available for public use from early November and an official opening celebration will take place later that month.

Cruyff Court Neale Cooper is being built on local authority land adjacent to the school and has been named in honour of the legendary Aberdeen player, who passed away in 2018.

Cruyff Court Denis Law, delivered by the same partners, became the first facility of its type in Scotland when it was opened at Catherine Street in 2017.

Councillor Jenny Laing, Aberdeen City Council Co-Leader, said: “The Cruyff Court concept is all about creating fun, safe and engaging spaces for young people in the heart of communities and it is fantastic to see the pupils of Tullos getting a first taste of this wonderful facility on their doorstep.

“The Council is delighted to have provided £250,000 of funding for the project as part of the wider investment being made in Torry’s next generation. From the creation of the Lochside Academy campus to the success of the Big Noise Torry project and the plans for the new Torry community hub and school, the positive change in the area is creating new and exciting opportunities for the community’s young people to flourish.”

Denis Law said: “What we have seen at Catherine Street since it opened is lots of smiles, laughter and energy – it’s great to see that same spirit at Tullos as we prepare to open the second Cruyff Court in Aberdeen. It’s a wonderful project to be involved with and all of the partners are looking forward to helping young people in the area to build confidence, grow friendships and express themselves through the activities that will be on offer. It’s just brilliant to know we are so close to opening and I’m looking forward to visiting soon.”

Graham Thom, chairman of the Denis Law Legacy Trust, said: “Cruyff Court Neale Cooper and Cruyff Court Denis Law are named in honour of two men whose achievements go far beyond football and the facilities are also about more than sport – they are about giving young people a focal point and encouragement to develop in lots of different ways. We are so pleased with the progress there has been at Tullos in a short period of time and it was fitting that the pupils at Tullos were the first visitors. I’m sure they will all spend many hours on Cruyff Court Neale Cooper in the years to come.”

Niels Meijer, director of the Johan Cruyff Foundation, said: “We’re looking forward to open second Cruyff Court in Aberdeen together with the City Council and the Denis Law Legacy Trust. The first Cruyff Court is having a great impact, so when asked to cooperate in building a second pitch, we were positive from the start. It’s great the Cruyff Court Neale Cooper is there and the Council has also invested in the surrounding area, so it has become a space that benefits not only the children but the whole community.

There are more than 250 Cruyff Courts in more than 20 countries worldwide, creating a safe place to play for young people and designed to encourage participation in a range of sports as well as a place where they learn about respect, responsibility and integration.

The Denis Law Legacy Trust spearheaded the introduction of the concept to the north-east with support from the Foundation and Council. Cruyff Court Denis Law has been hugely popular and includes sessions delivered as part of the Trust’s award-winning Streetsport programme.

The success provided the inspiration for the second Cruyff Court and Council-owned playing fields were identified as the preferred location following consultation with the community and project partners.

In addition to the second Cruyff Court in the city, the Cruyff Foundation has also supported the Schoolyard14 projects at both Skene Square Primary School and Danestone School in Aberdeen. Markings have recently been installed in the playgrounds of the schools and are there to inspire and encourage activity amongst the pupils. Pupils at the schools worked on projects to choose the markings and consulted with fellow pupils before agreeing the final layout.