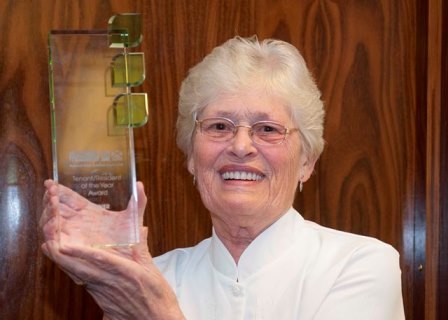 Tributes have been paid to a long-standing community champion who sadly passed away earlier this month.

Councillors and council staff have paid tribute to Rita Buchan who worked tirelessly for more than a decade to improve the lives of council tenants across the city.

Mrs Buchan, who was a former Councillor for Hilton, passed away on 3 November after a long-term illness – just days after Councillors approved plans by tenants to award a trophy in her honour.

The Rita Buchan Tenant Participation Champion Cup is in recognition of the outstanding commitment shown by Rita to tenant participation for many years and for her achievement of being the first Aberdeen City Council tenant to receive the Tenant Participation Advisory Service (TPAS) Tenant of the Year award in Scotland when she was honoured in 2013.

The Rita Buchan Tenant Participation Champion Cup will be presented to an individual or group who have made an outstanding contribution to tenant participation at the annual tenant and resident social event in December.

Aberdeen City Councillor Yvonne Allan said: “Rita was an invaluable member of the community and worked tirelessly to help people in her neighbourhood and indeed across the city.

“As a Councillor, Rita focused on her constituency work and long after remained committed to creating strong tenant links with the Council to help to establish the vital relationship between officers and tenants in the city that exists today.

“Rita was a true community champion and I would like to take this opportunity to offer my sincere condolences to her family and her friends.”

Pam Gray, Rita’s sister, said: “Whether it was as a Councillor or as a housing volunteer Rita campaigned for the people.

“She was absolutely over the moon when she won Tenant of the Year three years ago and the award took pride of place on her mantelpiece. Rita gave up a lot of her time to help train other tenants and they were always phoning her to ask for advice.

“I am pleased that this trophy is in her memory, she was told about the cup before she died and she was thrilled.”

Mrs Buchan was involved in establishing the award winning Sheltered Housing Network and has presented at the Chartered Institute of Housing Annual Conference on its successes.

Rita also undertook the auditing of tenant and resident group annual accounts and visited many sheltered housing complexes training the treasurers as well as attending their annual general meetings. She was also enthusiastic about encouraging the next generation of housing volunteers and often took her grandson Jack along to the housing open day.