...with public to vote on “Hall of Heroes”

From Nobel-winning scientists to stars of the stage to sporting champions – a dazzling array of talent will be celebrated at a new Aberdeen visitor attraction.

Provost Skene’s House is being redeveloped under the City Centre Masterplan to tell the story of local people who helped transform the wider world.

Today also marked the launch of a three-week public poll (details below) to decide who should enjoy an additional presence in a “Hall of Heroes” – drawn from a cross-section of categories to ensure an even spread of representation across different fields of endeavour.

There will be 10 heroes in all. The stories of more than 100 people will be showcased in the historic Guestrow building, which is being renovated through the £1.5 million Masterplan project.

Aberdeen City Council leader Councillor Jenny Laing said: “People from Aberdeen and the North-east have shone across the world and Provost Skene’s House will be a beacon to their achievements.

“This Masterplan project will draw visitors from near and far. They will be amazed by the breadth of talent we have produced over the centuries – and which we continue to do so.

“It’s especially exciting that the public will have a chance to vote, now and in the future, for their own heroes, those held in high regard or with particular meaning for them.”

Deputy Leader Councillor Marie Boulton said: “This promises to be a brilliant new attraction that could inspire future generations to see the world as their stage.

“The City Centre Masterplan presents the city as ours to transform, and Provost Skene’s House’s will tell the stories of individuals who brought change, not just locally but globally.

“It’s also great that the project will involve conserving one of the city’s best-known buildings.” 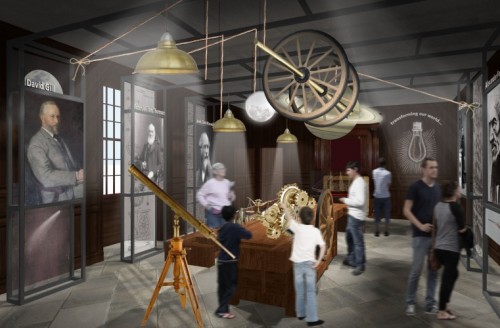 The selection criteria for Provost Skene’s House allowed for those who were born, lived, or worked in Aberdeen or the North-east.

Names were drawn up with the guidance of a steering group, which included representation from the tourism, cultural, academic and business sectors. Consideration in determining the final line-up included space and available exhibition material.

The Hall of Heroes will serve as a welcome on the ground floor, which has an arching stone ceiling. The first floor will be dedicated to World Firsts, and other sections will cover Natural Wonders and International Trailblazers.

The public are being asked to vote for their hero in each of five categories: Stars of Stage and Screen; Musical Maestros; Sporting Champions; Wizard Wordsmiths; and Scientific Saviours – 50 names in all. The two with the highest number of votes in each category will be chosen, giving 10 heroes.

Voting can be carried out online via the Council website. Forms will be available at Marsichal College and in libraries and community centres. All city schools are being invited to take part.

Lyndsey Bowditch, director of Studioarc, the consultancy working on the redevelopment, said: “We are really excited to be designing this new visitor attraction and researching the remarkable people from the North-east, who have been real game-changers and history-makers across the generations."

The ground floor will house an Access Gallery for use by visitors with mobility issues, which will enable visitors to virtually explore the content presented on the upper levels.

Provost Skene’s House has been closed during the construction of Marischal Square, of which it will be a focal point when it re-opens (scheduled for Summer 2017).

The building – which dates from 1545 – previously housed a series of period rooms, furnished to show how people lived in the 17th, 18th and early 19th centuries.

* The online survey can be found here: https://consultation.aberdeencity.gov.uk/consultation/hall-of-heroes