Tour Series Returns to Aberdeen in 2019 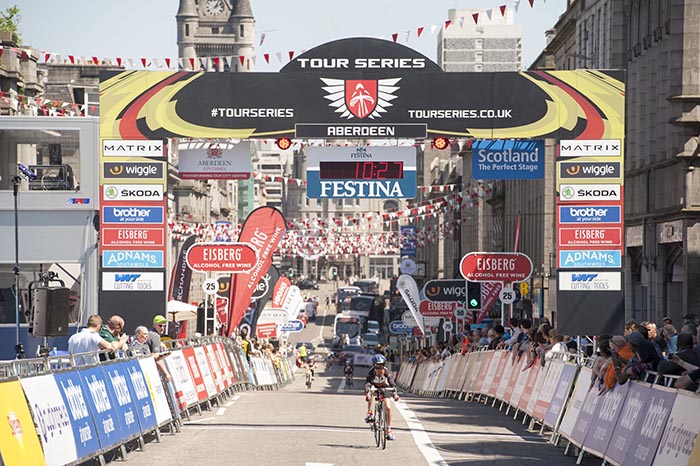 Britain’s top professional cyclists will once again take to the streets of Aberdeen as the OVO Energy Tour Series returns on Thursday 16 May 2019.

Taking place in 10 town and city centre locations, The Tour Series has become an annual highlight of the domestic racing scene since its inaugural campaign in 2009. Previous competitors include Olympic gold medallists Laura Kenny, Joanna Rowsell, Ed Clancy and Dani King, as well as emerging talent such as junior World and European cyclo-cross champion Tom Pidcock.

Aberdeen City Council Co-Leader Councillor Jenny Laing said: “We are delighted that the OVO Energy Tour Series is set to return to Aberdeen. The 2017 and 2018 Tour Series events were outstanding with people lining the streets to support both the community races and the amazing professional athletes.

“Aberdeen is a dynamic city which offers a great deal for both residents and visitors. We are making a concerted effort to raise the city’s profile through our ambitious events programme and bringing The OVO Energy Tour Series to Aberdeen, in conjunction with EventScotland, will strengthen Aberdeen’s position as a must-visit destination for high-profile cultural and sporting events.

“This leading cycling race is one of the first events in our ambitious summer programme and is part of our wider Aberdeen 365 Events Strategy, a City Centre Masterplan initiative, which will see events such as The OVO Energy Tour Series and Great Aberdeen Run bring the streets of Aberdeen to life”.

The event marks the start of a busy 12 months for the city which will see the re-opening of Aberdeen Art Gallery following its major redevelopment and the opening of The Event Complex Aberdeen. With the recent opening of the Aberdeen Western Peripheral Route the event will be even more accessible to a wider audience.

Commenting on the announcement, OVO Energy Tour Series Race Director Mick Bennett said: “We are delighted to be returning to Motherwell and Aberdeen this May. The Scottish week of the OVO Energy Tour Series has become a cornerstone of the calendar in recent years, with both events enjoying great support from spectators and the wide range of participants taking part in the Scottish Cycling support events. We look forward to more of the same this May.”

Further details of the Aberdeen event, including the city centre circuit that will be used by the elite riders will be announced in the coming weeks.

Details of the men and women’s teams for the OVO Energy Tour Series will be announced in April. Last year’s men’s winners on the night were champions-elect Canyon Eisberg. The women’s honours in 2018 fell to the Storey Racing team, led by Scottish Commonwealth Games star Neah Evans.

Tour Series Returns to Aberdeen in 2019