The winner of the AJ Bell Tour of Britain was crowned today in Aberdeen after the country's biggest cycle race reached a thrilling conclusion before a huge crowd at the Beach Esplanade.

Aberdeen City Council leader Councillor Jenny Laing – representing the city at the podium presentation – hailed the event as a “springboard for future success”.

The Stonehaven-Aberdeen stage was the 8th and final of the race, which had started in Penzance on September 5 and visited different parts of the UK on different days.

More than 100 of the world’s best cyclists had set off from Stonehaven, climbed the Cairn o’ Mount, looped around Ballater, and passed through Donside before arriving in the city for a closely-fought and spectacular seafront finish.

Belgian Wout van Aert of Team Jumbo-Visma secured both the stage win and overall victory based on the combined time for all eight stages.

Thousands of fans had lined the route, and visitors to the Beach area were also able to enjoy dozens of attractions at the Getabout Activity Village, run by a partnership of local organisations promoting sustainable transport. 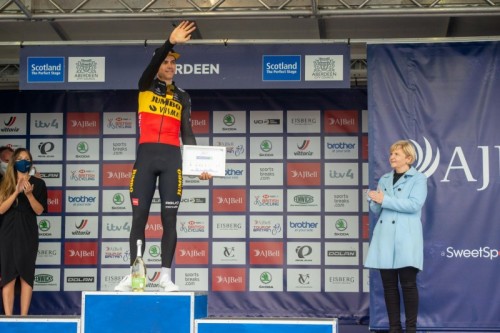 Cllr Laing said: “The Tour of Britain offered us the chance to witness world-class athletes in action and allowed thousands of people to share that kind of collective experience for the first time since the Covid-19 pandemic.

“It was truly a momentous day, one that signals that we are open for business and which we will use as a springboard for future success.

“The council has continued to invest in supporting the tourism, leisure and hospitality sectors, and we are bringing forward a Beach Masterplan and reviewing our City Centre Masterplan to ensure we have the right infrastructure to grow our city and our events offering.

“The Tour of Britain delivered the best possible result for the City Region and the people who made it happen, and we look forward to staging the start of the race in Aberdeen next year as part of the 2022 event.”

More on the Tour of Britain.