Torry street audit is a success

Almost 20 people in Torry gave their suggestions for how their local streets and public spaces can be improved.

Representatives from Aberdeen City Council were joined by Living Streets, the UK national charity for walking, and locals from the Torry community to tour some of the streets in the area.

The aim of the street audit was to give people the opportunity to say what they like about their local streets and what can be improved. Participants walked from Tullos Primary School up to the Hen Hooses and on to the old Torry Community Centre. 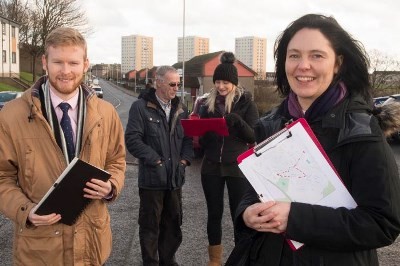 After the audit participants gave their observations about the area. Locals noted that the area had a lot of green space but that some work could be done to ensure this space was maintained. Others suggested that more could be done to make the area more accessible for people in wheelchairs or families with prams. Recommendations included planting new bushes, lowering kerbs and improving ramps.

Aberdeen City Council’s Transport and Regeneration spokesperson Councillor Ross Grant said: “It was very encouraging to see people getting involved and having their say to help make their community a better place for everyone.

“We want to encourage more people to get out and about so it is important that our streets are fit for purpose - and who better to tell us how that can be done than the people who already use them.

“We received some fantastic feedback and I’m sure there are things that can be done quickly to help improve the area. I look forward to reading the report from Living Streets.”

Living Streets will compile a report based on the opinions of the local community which will then be sent to Council officers for consideration. Aberdeen City Council is currently exploring funding options to carry out viable improvements identified in the report.

Torry street audit is a success