Torry Academy to live on in unique commemorative sculpture 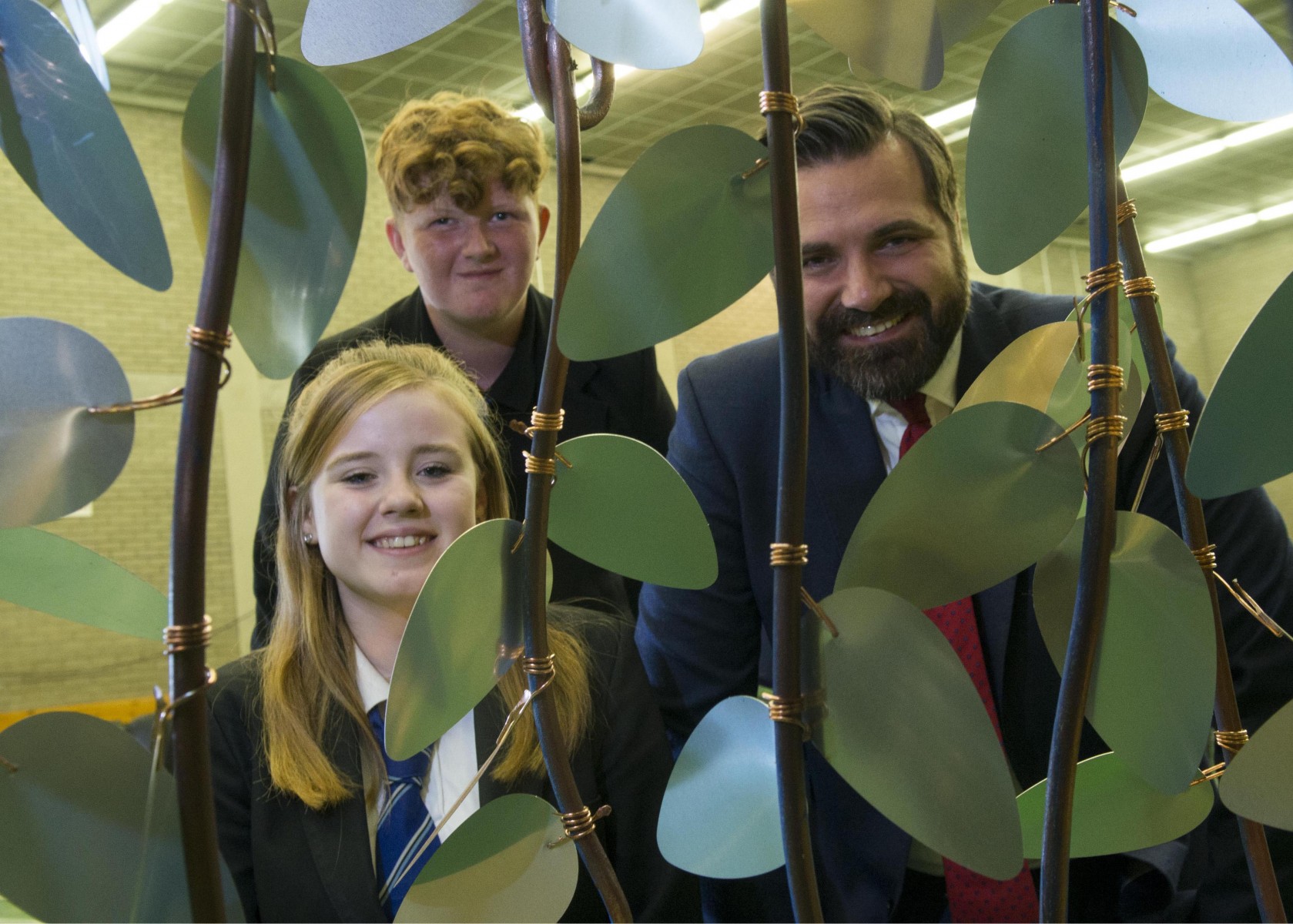 Torry Tree 4
03/07/18 With the closer of Torry Academy a special piece of art was commissioned. The metal tree by artist Margaret Preston- refection Mason Allison (14Yo S3) and Niamh Aldridge (15 YO S3) and Councillor John Wheeler,

As Torry Academy prepares to close its doors for the last time, a permanent memento in the shape of a unique artwork will ensure that the school lives on in the local community.

Both Torry and Kincorth academies close this week to make way for the state-of-the-art £47 million Lochside Academy but artists Margaret and David Preston have created a striking willow tree sculpture with an engraved gold leaf for each pupil and staff member in Torry Academy’s final year.

The names were engraved in a handwritten style and differently coloured reflecting the individuality of the pupils. In time, the copper windings on the tree will oxidise and the tree colours will reflect the school tie: blue, aqua and silver. The gold coloured leaves serve as a warm contrast and reflect the great worth of each pupil and member of staff to the community.

Councillor John Wheeler, Educational Operational Convener, said: “It was great to meet Margaret Preston earlier this week and see her and David’s fabulous sculpture at first hand in Torry Academy.

“It’s a fantastic piece of work and a fitting tribute to the school which has played such a huge role in the community since 1927.”

Margaret Preston described the “very strong brief” she and David received from Torry Academy. Throwing her arms wide she said she was told “We’d like a willow tree this size to fit in the school!”

Margaret added: “The willow tree did seem sensible as it would enable everyone to see the names, and if it wasn’t too big people might find their own name!

“The tree is made of 30 mild steel bars that curl and taper and are held in place by two flanges and the base. Conceptually these unique and mighty flanges and base represent Family, Community and School. Through these strong institutions flow the strands or years of pupils who have been shaped as they pass through.

“The base perhaps suggests compass/clock and world, which resonates with the possibilities of future influence as Torry Academy pupils go out to take their place in the world.

Collars bearing the inscriptions of Torry Academy 1927-2018 and the school motto will be fitted retrospectively to prevent damage during transport of the tree which will eventually be situated outside Torry Library.

A video is currently being created showing the artists at work sculpting the commemorative tree.

Torry Academy to live on in unique commemorative sculpture