Three in a row for Aberdeen apprentice

An Aberdeen City Council apprentice has been named best in Scotland for the third year running.

Graeme Baird, an electrician apprentice, was hailed Scottish Apprentice of the Year in the 3rd year category by APSE at an award ceremony in Dunblane on Thursday night (16 February).

This year Graeme completed a hat-trick after claiming the title of Scottish Apprentice of the Year in the 1st and 2nd year categories in 2015 and 2016. Graeme was also shortlisted for the UK award in 2015. 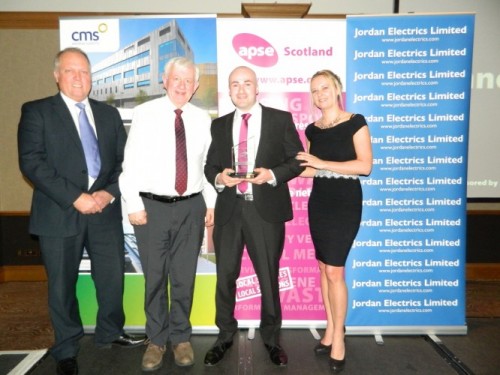 old moved to Aberdeen from Carluke as there were no apprentice opportunities nearer his home. He joined Aberdeen City Council in 2013 and earned the accolade of best 1st and 2nd year electrical apprentice at Tullos College.

David Hutcheon, 24, also made it through to the final stages and he was named runner-up for the Best 2nd Year Plumbing Apprentice.

Councillor Ramsay Milne, who attended the award ceremony on behalf of Aberdeen City Council, said: "This is yet another example of how our Apprentice Scheme continues to go from strength to strength.

“I wish to congratulate Graeme and David on their success and thank everyone who represented Aberdeen City Council at this year’s awards, including the staff that provide help and support to our trainees on a daily basis.”

All five apprentices had to present APSE with a portfolio of their work, details of any awards they have won, an essay, copies of college reports and a number of references. The two shortlisted apprentices were also interviewed by a panel on the day of the award ceremony.

Aberdeen City Council’s apprenticeship scheme is for four years and provides on-the-job training for those looking to gain skills necessary for employment.

Three in a row for Aberdeen apprentice