Thousands turn out to greet Denis Law in Aberdeen parade 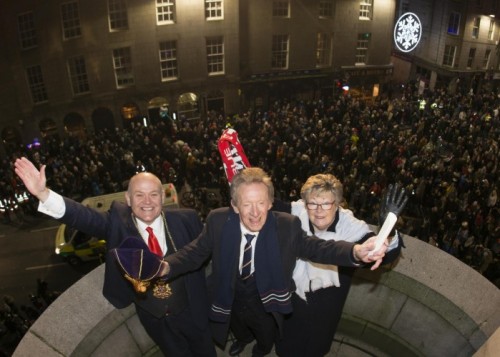 More than 15,000 people lined Union Street to greet Denis Law as he celebrated the Freedom of the City of Aberdeen in style tonight (26 November 2017)

He was joined by family and friends as well as young representatives of community groups and clubs associated with Streetsport, the award winning initiative led by the Denis Law Legacy Trust. A host of other groups and entertainers were part of the football-themed festive procession and the new Freeman of the city received a hero’s welcome.

Denis Law said: “I really didn’t expect the reception I got – I’m almost lost for words, it was just unbelievable. The parade down Union Street was wonderful and to come out on the Town House balcony and get such a warm reception is something that will stay with me forever.

“I have always called Aberdeen home and this weekend has meant so much to me. I’m looking forward to relaxing now and letting it all sink in – there has been so much going on and I’ve enjoyed it tremendously.”

The Lord Provost Barney Crockett said: “Denis is a unique Scottish icon, there is nothing but good feeling towards him and that is because of his great personality, modesty, integrity and of course his achievements in football and in life.

“It was fantastic to see the people of Aberdeen turn out in their numbers – from the youngest faces in the crowd to those who grew up watching Denis play the game, everyone relates to him and knows all about his talents. “

Saturday’s ceremony marked the first conferral to take place in Aberdeen since Scotland the What? received the honour in 2008 and 18 years since fellow football legend Sir Alex Ferguson was honoured. Previous recipients include international figures such as Mikhail Gorbachev and Nelson and Winnie Mandela as well as eminent UK politicians, including Sir Winston Churchill.

Thousands turn out to greet Denis Law in Aberdeen parade