A major drive to showcase the North-east of Scotland's links with Thomas Blake Glover  who was instrumental in setting up the Mitsubishi company  has been launched. 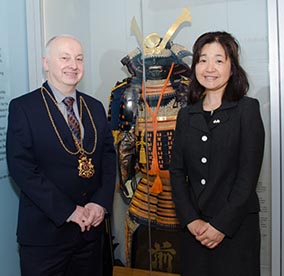 A booklet has been published explaining Glover's life story and how he became so instrumental in shaping Japan, a Glover Trail has been highlighting his extensive family connections across the North-east of Scotland, and a permanent exhibit exhibition has opened at the Maritime Museum in Aberdeen showing the story of his life in Japan.

Japan's Deputy Consul General in Scotland, Mrs Rumiko Ishigami, attended the launch event along with members of The Grampian-Japan Trust, and The Glover Foundation.

Thomas Blake Glover, dubbed the "Scottish Samurai", was instrumental in the development of Japan as an industrial nation in the late 1800s.

He was born in Fraserburgh in 1838 to a local coastguard, Thomas Berry Glover, and as a young child moved to the Bridge of Don on the northern edge of Aberdeen. He was educated at the Chanonry House School in Old Aberdeen until the age of 16. The Glover family later lived in a home in the Bridge of Don area of Aberdeen which is now called Glover House. It is thought Glover probably stayed there in later life when he was back in Aberdeen negotiating a contract for one of the Japanese warships built in the city.

Working for the Scottish trading company Jardine, Matheson and Co, Glover travelled to Nagasaki in 1859 and spent the rest of his adult life in Japan, helping it industrialise and playing a role in the changes in its government and way of life. A friend and advisor to the Japanese government and the industrial company Mitsubishi, Glover died in Tokyo in 1911 aged 73.

The permanent exhibit includes a model of the Aberdeen-built warship Jo Sho Maru, bottles of Kirin beer which feature Glover on the label from the brewery he helped and developed, and a suit of Samurai armour which belongs to The Grampian-Japan Trust.

The Lord Provost said: "Thomas Blake Glover came from humble beginnings in the North-east of Scotland and became one of the most influential and instrumental people in the development of Japan in that period in history.

"It is only right and fitting that we celebrate the work and life of Glover, who achieved many great works in his life and is still honoured today in Japan.

"We appreciate there are many tourists who come to the area looking for information on Glover so it's good they can come to the exhibit at the Maritime Museum, and look at the leaflet or go on the Glover Trail.

"We hope many more people, both in this area and from Japan, learn more about Glover's North-east roots and we look forward to giving them a warm Scottish welcome."

The Glover Trail features 10 places to visit in Aberdeen and Fraserburgh which were associated with Mr Glover's life. Other villages on the North-east can also be visited, such as Sandend where his father was first posted in 1828 or Collieston where the family lived between 1847 and 1849, before they moved to Aberdeen.

Provost Webster said: "It was an honour to welcome representatives of the Consulate General of Japan to the North-east, and it is wonderful to see a focus on culture and a fantastic celebration of the area's links with Japan.

"I am very pleased that this booklet, exhibit and Tourist Trail have been developed. They will help shine a light on Thomas Blake Glover, a true Broch son who went on to do great things in nineteenth-century Japan."

Steve Harris, chief executive, of VisitAberdeen, said: "VisitAberdeen is delighted to see this Thomas Glover initiative. Visitors are attracted by history and expect to be able to share in a city's past and culture. This initiative will add another layer to the Aberdeen experience."