The first of the huge steel beams for the Third Don Crossing was today lifted into place over the River Don. 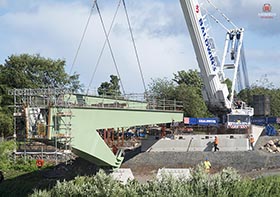 The 60-tonne beam  which is a box-section girder  was manoeuvred into place by a 1,000-tonne specially-constructed crane after it was delivered to the Tillydrone site two weeks ago.

Finance, Policy and Resources Committee Vice-Convener Councillor Ross Thomson said: "This is a huge step forward in the construction of the Third Don Crossing.

"The bridge will make such a difference for residents and visitors getting around Aberdeen along with commuters travelling in from the north, and it is very gratifying to finally see the bridge taking shape.

"This is an important and significant step in the construction of a major piece of infrastructure for Aberdeen."

The beam was secured into place to the already-constructed abutments.

A viewing area on Gordon Mills Road was specially constructed so people can safely watch the huge steel beams being lifted into place and other progress at the site.

The beams were transported to the site in six sections, four to Grandholm Village on the north side of the River Don on 18 June, and the remaining two to Tillydrone on the south side the following days.

Preparation works have been on-going since the steel beams were delivered to the site, with the south beams being lifted into place this week and the north ones next week.

The project requires the construction of two major bridges, with the first being a 26m skew span reinforced concrete bridge over the Mill Lade at Grandholm Village  which is at a more advanced stage already - and the second a 90m span steel box girder bridge over the River Don. 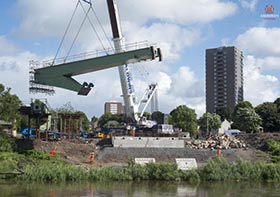 Once the steel beams have been positioned, construction can start on the reinforced concrete deck.

Balfour Beatty is the main contractor for the Third Don Crossing.

Work started in August 2014 and the contract completion date is expected in January 2016.