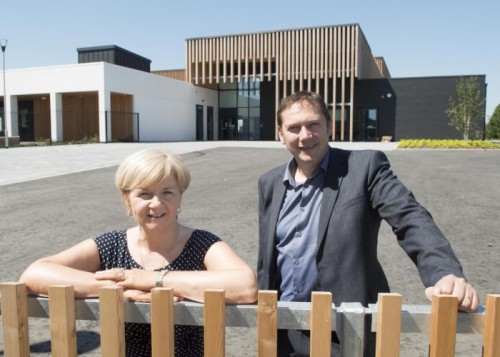 The £13million Stoneywood School has been handed over to Aberdeen City Council by contractors as final preparations begin for the arrival of the first pupils.

Built on the site of the former Bankhead Academy, the new Stoneywood complex replaces the neighbouring primary school and retains the existing name.

Council Co-Leaders Cllr Jenny Laing and Cllr Douglas Lumsden were among the first visitors to the school following the completion of construction.

Fit out to ready the building for the new school year is now well underway, with an increased capacity of up to 434 pupils. The programme will continue over the summer to hit the deadline for opening on August 22.

Stoneywood School and Lochside Academy will open a day later than other city schools to allow teachers an opportunity to familiarise themselves with the new facilities.

Cllr Lumsden said: “We are incredibly proud of the programme of school construction and Stoneywood is a very impressive new building. It will provide a wonderful environment for pupils and staff as well as for the wider community.

“The attention to detail is excellent and the design fits the needs of modern learning, providing the ideal platform to continue the excellent work that has been done at the existing Stoneywood School. The new term will be full of excitement for everyone making the move.”

The single-storey building is based on sustainable design principles and features a range of facilities, including a large nursery, library and sensory room. Outdoor learning has been a key focus, with a sensory garden and orchard sitting alongside the new 4G sports pitch.

Cllr Laing said: “Coming so soon after the completion of Lochside Academy, it is fantastic to see the investment in the schools estate coming to fruition. This is a building that the community will take to their hearts and I know the teaching staff are looking forward to welcoming the pupils in August.

“Orchard Brae, Lochside Academy and now Stoneywood School are all fantastic additions for the city and there is further investment to come in the months and years ahead as we continue to prioritise the next generation. It’s vital every young person in the city has access to the best facilities possible and the support to fulfil their potential.”

Construction of Lochside Academy was completed in June. It will replace Kincorth Academy and Torry Academy, which will both close for a final time this week. With a capacity of up to 1,350 pupils, the three-storey building incorporates community facilities including a six-lane swimming pool, fitness suite, dance and drama studios, 4G sports pitches, games halls and library.