The final huge steel beams for the Third Don Crossing were today being lifted into place to complete the span across the river.

The beams were being manoeuvred into place in two lifts by a 1,000-tonne specially-constructed crane. 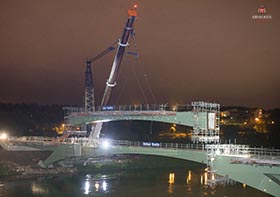 Finance, Policy and Resources Committee Vice-Convener Councillor Ross Thomson said: "This is a mil estone in the construction of the Third Don Crossing because the public will now see the bridge spanning the river for the first time.

"It has been great to see so many people come down to watch the process of the last piece of steel being lifted into place. It shows that the public recognise how historic this is for city."

City Council Transportation Spokesperson Councillor Ross Grant said: "Aberdeen City Council and the contractors will continue to work closely with the local communities on both sides of the river to ensure that the mitigation and environmental measures remain a key part of the bridge construction. It is vitally important that the impact on local residents is minimised as far as possible."

A viewing area on Gordon's Mills Road was built to allow people to watch the steel beams being lifted into place and other progress at the site.

The beams were transported to the site in six sections, four to Grandholm Village on the north side of the River Don on 18 June, and the remaining two to Tillydrone on the south side on the following days.

The project requires the construction of two bridges  a 26m reinforced concrete bridge over the mill lade at Grandholm Village and the 90m span steel box girder bridge over the Don.

Once the steel beams have been positioned, construction can start on the reinforced concrete deck. Balfour Beatty is the main contractor for the project.

The crossing will also see the construction of a new single carriageway link road between the Parkway/Whitestripes Road junction and the Tillydrone Avenue/St Machar Drive junctions. Work started in August 2014 and the contract completion is expected in January 2016.