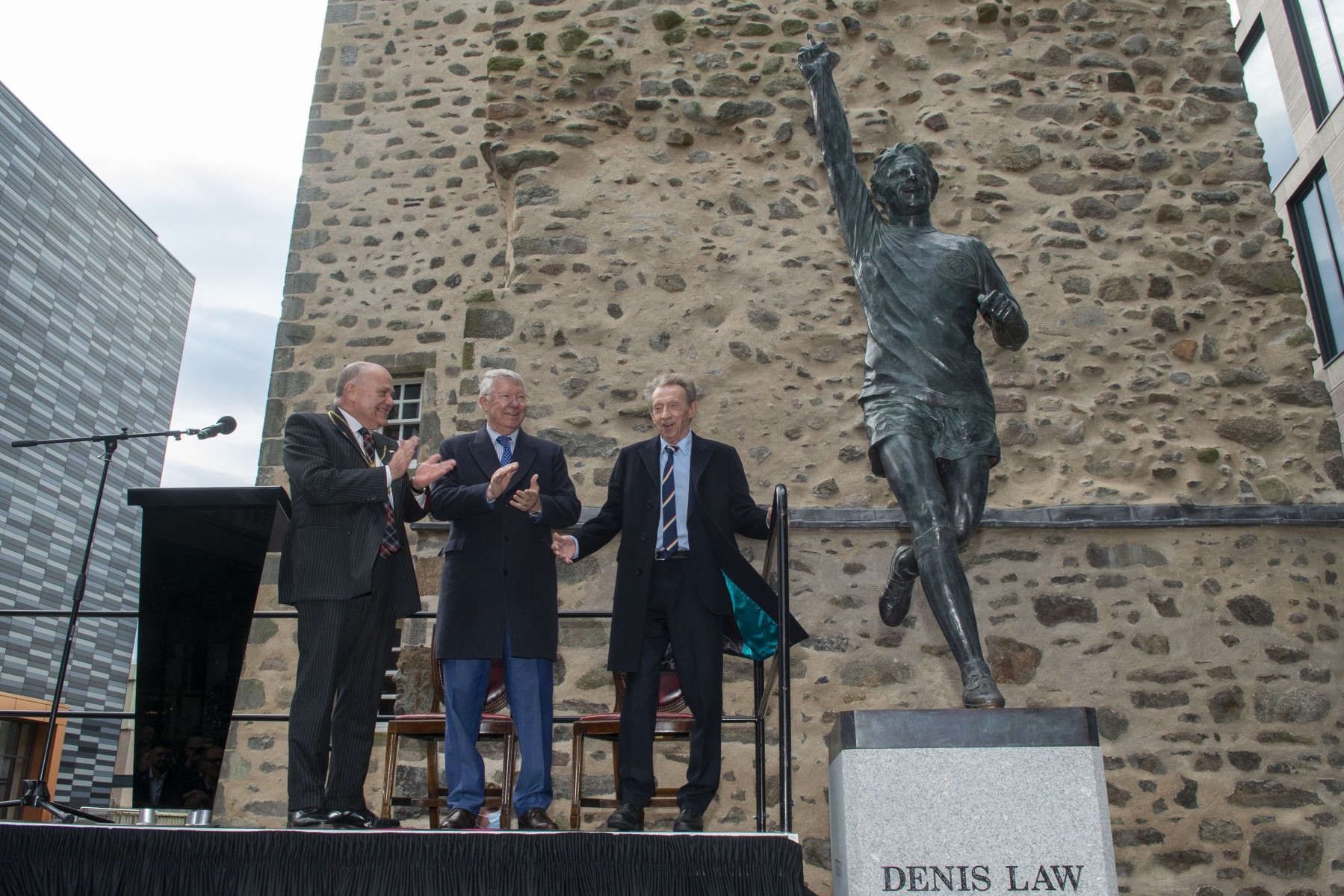 A bronze statue of footballing legend Denis Law CBE has been unveiled by The King himself in the heart of his home city of Aberdeen today (Thursday 18 November).

The ceremony included a welcome from the Lord Provost of Aberdeen Barney Crockett, followed by a few words by Denis, former Dons and Manchester United boss Sir Alex Ferguson and dear friend of Denis and David Suttie, Trustee of the Denis Law Legacy Trust.

The statue (overall height: 4.7metres, bronze 2.7metres, base and plinth 2metres) is sited at the gable end of Provost Skene's House (PSH), which recently re-opened as a new visitor attraction after the city council's £3.8million renovation.

It was sculpted by Alan Herriot, who was also commissioned by the council to create the statue of King Robert the Bruce outside nearby Marischal College.

The Lord Provost of Aberdeen Barney Crockett said: “The people of Aberdeen hold Denis Law very close to their hearts and this statue represents appreciation of a local lad done good. Denis is a remarkable man, not only for his outstanding achievements on the football pitch for clubs and country, but for the fantastic charity work he has done over the decades especially through the Denis Law Legacy Trust.

“Located in the heart of the city centre I am sure thousands of people – young and older – will come and take a photo alongside this magnificent statue of The Legend that is Denis Law.

“I would also like to thank Sir Alex Ferguson for joining us at the unveiling to show his appreciation and support for his great friend Denis Law.”

Denis said: “I have to again express how humbled I am that this statue has been unveiled in my beloved Aberdeen. The city and people of Aberdeen have always meant so much to me and this truly a great honour. To be joined by so many of my family and friends, including Sir Alex, just makes it all the more special.

“I would like to thank them all for joining me today and also to Aberdeen City Council and Denis Law Legacy Trust for this fantastic tribute which goes way beyond my wildest dreams.”

David Suttie, Trustee, Denis Law Legacy Trust: “The Trust is delighted that the ‘Legend’ statue has finally been unveiled to the public in the heart of Aberdeen, Denis Law’s hometown.

“Known as ‘The King’ for his achievements in football, it’s great to see it situated outside Provost Skene’s House and in close proximity to King Robert the Bruce – two kings of the city facing each other – a fantastic tourist attraction.

“The statue is a fitting and lasting tribute to Denis who has contributed so much to Aberdeen thanks to his charitable work and remarkable footballing career. We are very grateful to Aberdeen City Council for helping make this happen.”

Sculptor, Alan Beattie Herriot said: “As a keen follower of The Beautiful Game, I was delighted to be asked to sculpt this tribute to Denis Law, who is undoubtedly one of the greatest footballers Scotland has produced and a hero of mine. As a young lad who played football at every opportunity with my pals; everyone one of us gripping the sleeves of our shirts in an effort to mimic the man himself.

"It is also particularly gratifying for me, to see this tribute sited within sight of another great Scot, King Robert the Bruce.”

Mark Williams, Chief Operating Officer, Denis Law Legacy Trust - Streetsport: “The statue is a tremendous addition to the city, and we hope that young people from Aberdeen and beyond visit and see it as inspiration of what can be achieved from humble beginnings.”

Both Denis and Sir Alex feature in PSH, which showcases people with links to Aberdeen and the North-east who have transformed the wider world.

As well as having a presence in the Hall of Heroes on the ground floor, Denis is celebrated in the Sporting Champions section, where memorabilia from his career is on display.

The cost and erection of the "Legend" statue, which shows the footballer in an iconic arms-raised pose, has been met by the city's Common Good Fund and the Denis Law Legacy Trust.

Denis, 81, was born and raised in the Printfield area of Aberdeen. The former European footballer of the year and Scotland's only winner of Ballon d'Or went to Powis Academy, before moving to England to play for Huddersfield when he was 16.

He went on to play for Manchester United, Torino and Manchester City. Known as The Lawman, he scored 30 goals for Scotland.

The legacy of Denis Law is already well represented within Aberdeen through Denis Law Legacy Trust and its successful Streetsport initiative with Robert Gordon University, as well as the Trust’s thriving Cruyff Courts in partnership with Aberdeen City Council.

Both Denis and Sir Alex are recipients of the Freedom of the City.