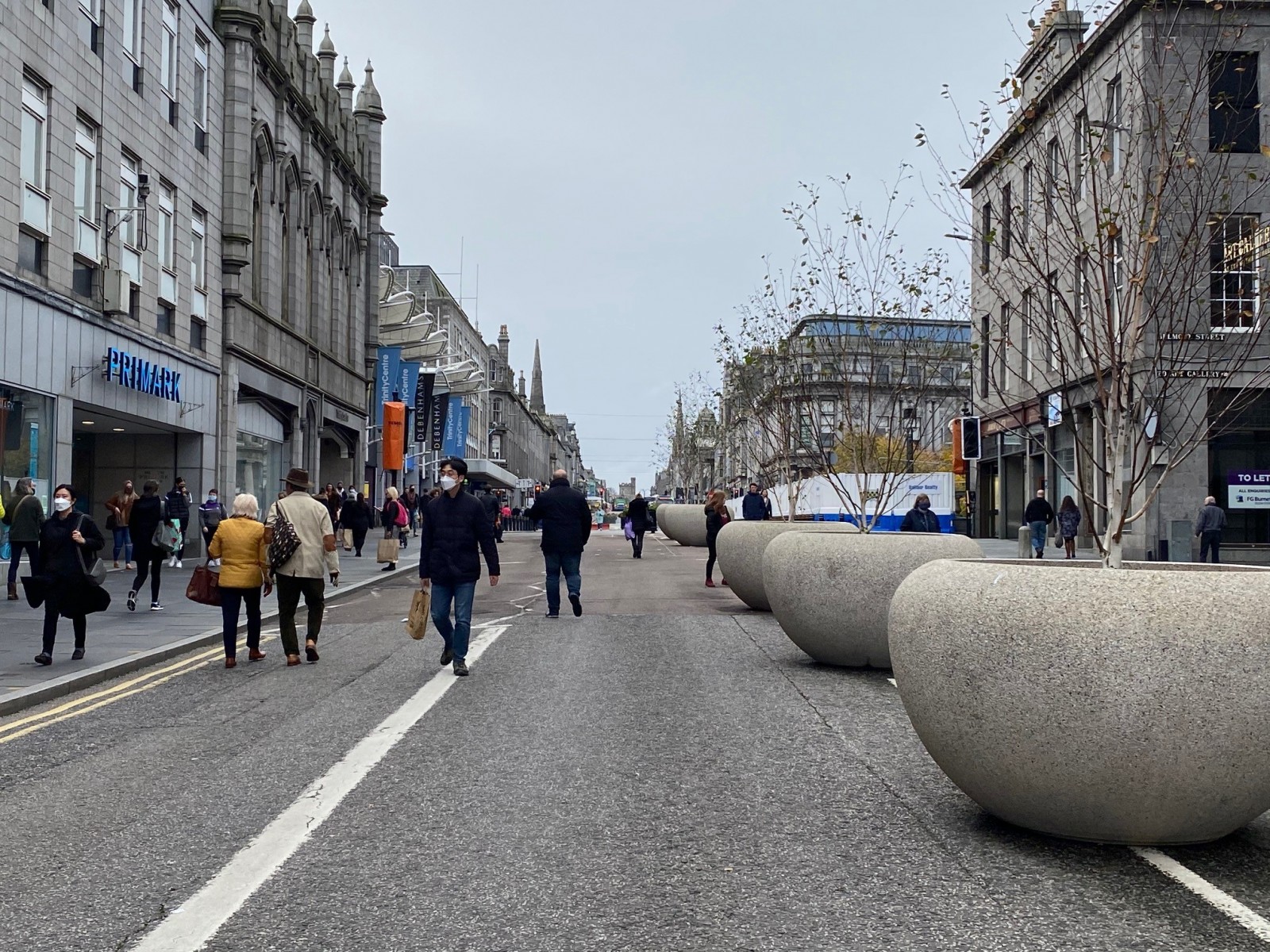 The temporary Spaces for People physical distancing interventions around the city are to remain in place at present due to the continuing coronavirus pandemic, an Aberdeen City Council’s City Growth and Resources committee agreed last night (Wednesday 3 February).

The members heard the recommendation from the Director of Public Health for NHS Grampian that the changes which have provided more spaces for pedestrians should remain in place, particularly in light of the new more transmissible variant.

The interventions in the city centre, Rosemount, George Street and Torry were put in place after the Scottish Government’s launched a Spaces for People programme which support local authorities around the country to reallocate road space using temporary infrastructure to enable physical distancing amongst members of the public for the duration of the COVID-19 pandemic. The interventions are also designed to encourage walking, cycling and wheeling and to make it safer for people who choose to walk, cycle or wheeling for essential trips or for exercise.

Committee Convener and Council Co Leader, Councillor Douglas Lumsden, said: “There remains a need to both encourage more active travel movement within the existing network and to create additional temporary active travel network where possible – but critically in normally crowded areas of the city to do so with physical distancing of two metres.”

Current Government guidance states that walking and cycling are the best forms of travel for ensuring physical distancing and reducing the risks of further transmission of COVID-19.

The report to the committee said that where data collection has been possible, it has shown a significant increase in pedestrians and cyclists using recreational routes and recreational destinations.

Many of the patterns experienced in the first lockdown have remained such as increased pedestrian and cycling activity at all of the city’s recreational areas including the Deeside Way, the major parks, and the beach. While city centre footfall is still struggling to recover and is still well down on pre lockdown levels, it remains by far the busiest part of the city overall. Within the city centre, the section of Union Street between Bridge Street and Market Street sees on average twice the footfall of any other section of Union Street.

The report said there has been support from both Police Scotland and Scottish Fire and Rescue for the interventions and council officers will continue to work with the emergence services to ensure that the interventions in no way impact on their service provision.

The committee agreed the report and that an update should be provided to members at an appropriate date. It was noted that Sustrans (the organisation which provided the Scottish Government grants) has confirmed the funding for the maintenance and removal of the interventions can be carried forward beyond the May deadline.