A series of events is taking place in Aberdeen to mark a worldwide anti-violence campaign known as 16 days of Activism.

The campaign, which aims to raise awareness of violence against women and children, will run from 25 November, which is International Day for the Elimination of Violence against Women, until Human Rights Day on 10 December.

As part of the 16 Days campaign the Aberdeen Violence Against Women Partnership (AVAWP) has devised a calendar of events which are being delivered by various agencies across the city. 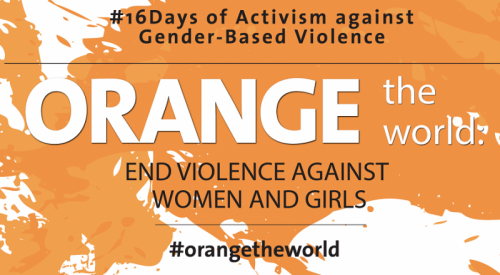 The campaign begins today (25 November) with awareness raising events held for school pupils and students which are aimed at highlighting issues of domestic abuse fostering appropriate behaviour from the next generation.

The front of Marischal College will be lit orange tomorrow (26 November) as part of a worldwide campaign to Orange the World and spread the word about gender violence.

This coincides with a conversation cafe held by Aberdeen Women's Alliance at the Station Hotel from 10am to 1pm to discuss women’s rights. The event finishes with an Orange Zone 'selfie booth' to spread the word through Twitter and Facebook. An orange inspired lunch will be served with opportunities to network and continue the discussions with like-minded women.

Councillor Lesley Dunbar, Chair of the Aberdeen Violence Against Women Partnership, said: “Domestic abuse is a very important issue. I hope these events go some way to highlighting the severity of the matter and promote the supportive services available to anyone who is experiencing such problems.”

Alison Hay of Grampian Woman’s Aid said: “We support the annual ’16 days of action’ campaign against domestic abuse and welcome a collaborative effort to raise awareness and maximise ongoing efforts that will allow women and children to live safer and happier lives.”

In partnership with Aberdeen FC Community Trust, representatives from the AVAWP will be at Aberdeen FC’s home game against Kilmarnock on 6 December raising awareness of the White Ribbon Scotland campaign, specifically targeting men and boys to tackle the issue of violence against women.

The 16 Days of Activism will culminate with a rally held in St Nicholas Square on Saturday 10 December at 11am. This rally will give members of the public the opportunity to hear from a diverse range of speakers from services such as Rape Abuse Support and Scottish Transgender Alliance.

Violence against women includes but is not limited to physical, sexual and psychological violence occurring in the family, general community or in institutions, sexual harassment and intimidation at work and in the public sphere, sexual exploitation, dowry-related violence, female genital mutilation, forced and child marriages, and honour crimes. These different forms of violence against women have their roots in gender inequality and are therefore understood as gender-based violence.

The Aberdeen Violence Against Women Partnership aims to eradicate violence against women in Aberdeen and make it a place where women and children can, with support when necessary, live free from the harm and inequality associated with gender based violence.