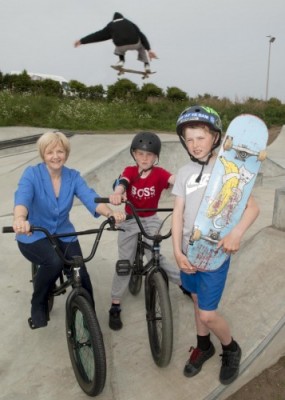 Local youngsters gave their seal of approval as a £55,500 refurbishment of a popular city facility was marked with a special session.

Aberdeen City Council has completed a revamp at St Fittick’s Skate Park in Torry, with Co-Leader Cllr Jenny Laing lending her support to local school pupils at a skateboard and BMX coaching and taster session led by Transition Extreme to mark the launch of the new look site.

Cllr Laing said: “It’s fantastic to see the facility already being well used and I’ve no doubt it will be a big draw for people from across the city.

“The Council values the role of play and physical activity and is clear about the importance of facilities that encourage that active lifestyle in all of our communities.

“We are in the midst of a significant investment in playparks throughout Aberdeen and the skate park refurbishment fits with the aims of that programme, providing a safe and welcoming environment that has transformed the area.”

The project was boosted by a £50,000 award from the SUEZ Community Trust, which enabled the expansion of the existing skate park to include 10 features for users of all abilities.

The Council’s communities team in Torry consulted with local young people prior to the work being undertaken to ensure the plans met with their needs. Sean-Paul Gordon, a talented young skater who was instrumental in shaping the design of the features, was one of those to join this week’s session.

St Fittick’s Skate Park will be put to good use over the school summer break as a venue for Extreme Summer, featuring sessions from 6-8pm each Monday hosted by Transition Extreme.