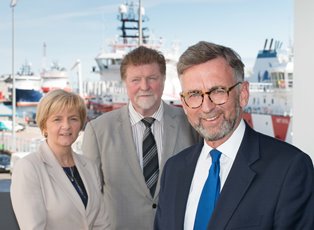 Both local authorities have been working closely with public and private sector organisations on the proposals, which aim to support the delivery of a regional economic development strategy based on innovation and skills development.

The strategy includes options to invest in transport, digital and housing infrastructure and reflects the international aspirations of the whole region.

The City Region Deal would be supported by the capital plans already in place from Aberdeen City and Aberdeenshire councils, along with other regional stakeholders and business sector investment over the next 10 years.

The meeting with Lord Dunlop comes as work progresses for a proposal to be submitted to the UK and Scottish Governments as part of the next stage in the process early in September.

Aberdeenshire Council Co-Leader Councillor Kitts-Hayes said: "We believe the Aberdeen City Region Deal represents a unique opportunity to not only anchor the oil and gas industry to the north-east but to expand upon the expertise and innovation that already exists here to the wider energy sector and related industries.

"Improvements in housing, transport and infrastructure coupled with investment in innovation, research and skills development is crucial to ensuring that the strong regional economy here in Aberdeen continues to contribute substantially to UK plc for decades to come."

Lord Dunlop said: "We are one year on from the successful Glasgow City Deal and the UK Government is committed to extending that model to Inverness and Aberdeen.

"Alongside the councils and the Scottish Government, we are working hard to develop robust and coherent proposals which I hope can secure something transformational for these cities."