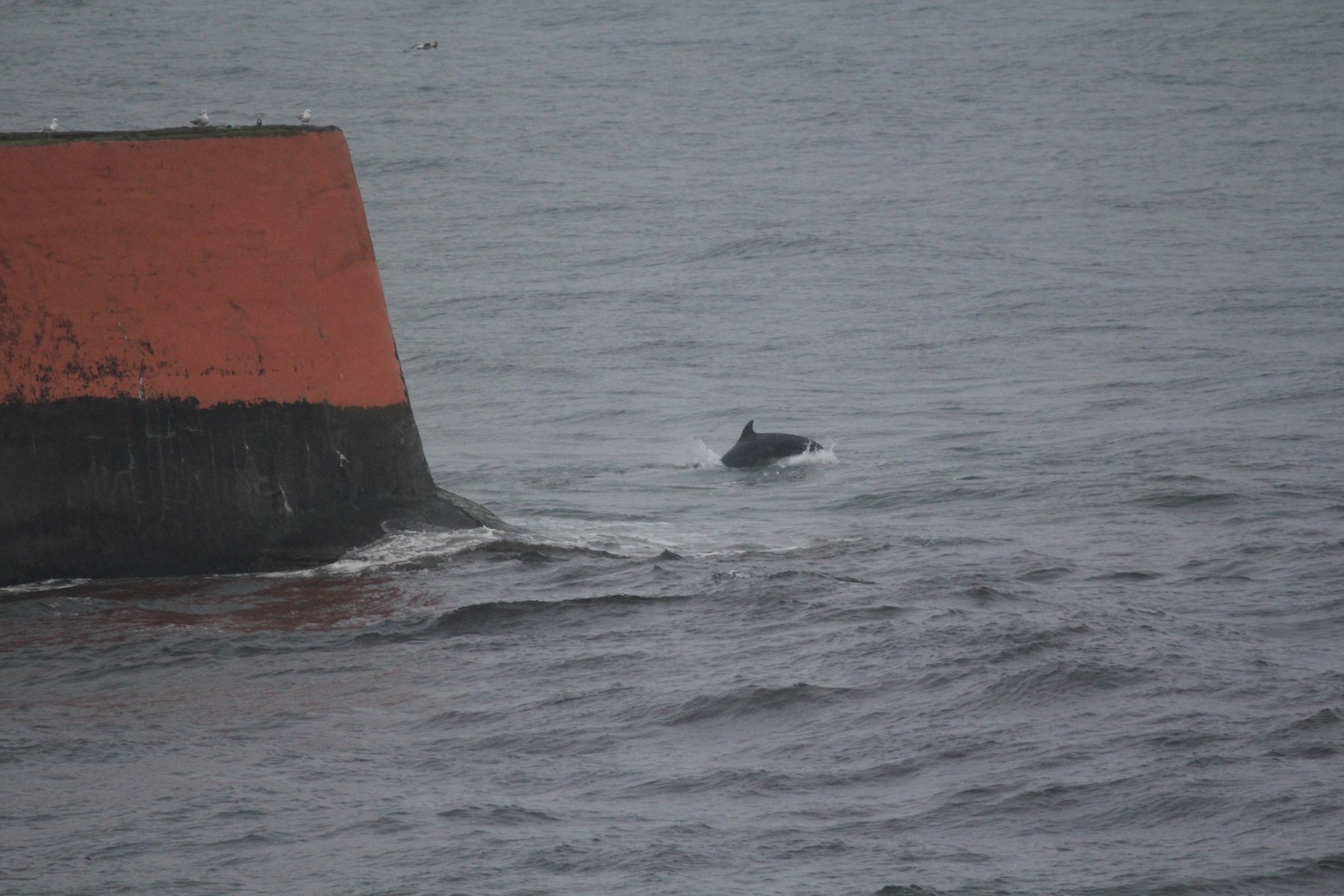 The launch of this year’s Dolphinwatch, which will run at Torry Battery on Thursdays to Sundays until 20 August, was held today with special guests - an appearance of a pod of dolphins in Aberdeen's harbour.

The popular visitor attraction, which is entering its fifth year, helps people experience one of the UK’s most impressive wildlife spectacles, just a short distance from Aberdeen city centre.

Stencilled silhouettes have appeared across the city this week in anticipation of the launch and coffee drinkers may also have noticed that some of the city’s cafes have been adding cocoa stencilled dolphins to the tops of cappuccinos. The dolphins have appeared alongside the hashtag ‘#DolphinsABDN’.

This new hashtag is designed to be used in conjunction with #RSPBDolphinwatch, to talk about the dolphins in Aberdeen, and the launch of #DolphinsABDN was timed to coincide with the start of this year’s Dolphinwatch.

Lord Provost of Aberdeen George Adam said: “Dolphinwatch has been a phenomenal success and we are more than delighted it is continuing again. We are very fortunate here in Aberdeen that we can watch these beautiful creatures so close to the shore and near to the city centre and we look forward to welcoming residents and visitors to Torry Battery with its gorgeous views of our beach.”

Since the project began in 2013, RSPB Scotland has recorded nearly 14,000 visits to Dolphinwatch, from regular visitors, to others from as far afield as Malaysia and Mexico. Most visitors have not been disappointed, with dolphins being seen on nearly 90% of Dolphinwatch days since the project started.

Adam Ross, a RSPB Scotland Membership and Engagement Officer and manages Dolphinwatch, said: “Many people don’t realise that Aberdeen is one of the best places in Europe to see bottlenose dolphins. This year’s team, Jen and Amy, are really excited to spend their summer raising awareness of this and helping people experience one of Scotland’s greatest wildlife spectacles. We hope to inspire people to care about nature and want to protect it as much as we do. But we also hope that the project is helping to put Torry, Aberdeen and the whole NE coastline on the map as an important home for marine wildlife and a wonderful place to see it.”

It’s hardly surprising then that when visitors were asked for feedback last year, 100% said they would recommend visiting RSPB Dolphinwatch to friends and family. Nearly half of the people who gave feedback lived locally highlighting the value of this free attraction to local communities. However, the rest came from elsewhere in Scotland, elsewhere in the UK and 12% were from overseas. With more than a quarter of respondents claiming to be in Aberdeen specifically to visit Dolphinwatch, the attraction to visitors is undeniable.

Jenni Fraser, Business Development Director at VisitAberdeenshire, said: “Our proximity to 165 miles of coastline and these fascinating mammals is, of course, a massive tourism draw for the region. Having them playing in the harbour just a stone’s throw from the city centre is even more impressive. As RSPB Dolphinwatch returns for another year, we are ready to attract and welcome even more tourists to our fantastic city.”

Dolphinwatch has helped Aberdeen gain a reputation as a special place to see dolphins. It’s particularly unusual to see dolphins so regularly, so close to a city centre, but the car park at Torry Battery offers the perfect vantage point from which to watch them. As regular visitors know, every day offers a different experience. Sometimes visitors will see a lone dolphin swimming gently in the harbour, but at the other extreme, there might be a group of more than 20 or they might be leaping, somersaulting and splashing around. This highlights just how important the area is for marine wildlife and as a nature watching spot.

Since it started in 2013, RSPB Dolphinwatch has grown bigger and better each year thanks to support from VisitAberdeenshire, Aberdeen City Council, Aberdeen Harbour Board Community Action Fund and Whale and Dolphin Conservation (WDC).

Chris Bain, External Relations Director for Aberdeen Harbour Board, said: “”We are delighted to be sponsoring Dolphinwatch again this year. Everyone at Aberdeen Harbour Board is very proud of our dolphin visitors and the Dolphinwatch team do a fantastic job in ensuring that the public are informed and assisted when they come to view these wonderful creatures. This undoubtedly adds considerably to the visitor experience”.

The popular attraction couldn’t run without help from local volunteers either. Last year, a large volunteer team contributed more 1,209 hours of their time to help visitors have an amazing wildlife experience and some of last year’s volunteers will be back again along with more than 15 new people that are keen to be involved this year.

As part of the project, RSPB Scotland staff and volunteers are also trained so that they can contribute to Whale and Dolphin Conservation’s Shorewatch programme which monitors the presence of whales, dolphins and porpoises in order to protect them.

Katie Dyke, Scottish Conservation Officer for WDC, said: “Scotland is an amazing place to see both whales and dolphins. Whale and Dolphin Conservation's Shorewatch programme works in 23 coastal communities across Scotland, training local volunteers to record their whale and dolphin sightings – it is so important to have eyes on the sea to help monitor, and so protect each species.”

RSPB Scotland’s Dolphinwatch team will be on hand at Torry Battery from 11am-6pm on Thursday to Sunday every week, from now until 20 August. They will be equipped with binoculars and telescopes provided by Viking Optical, and plenty of expertise to help visitors get the best experience possible.

Throughout the summer, there will be special events as part of Dolphinwatch too. Keep up to date at facebook.com/RSPBNorthEastScotland or twitter.com/RSPB_NEScotland (#RSPBDolphinwatch).