Revealed: Forget Them Not – A new public artwork for Aberdeen’s Remembrance Hall

A new artwork is being specially commissioned for Aberdeen's Remembrance Hall as part of the £30million transformation of Aberdeen Art Gallery.

Following submissions from artists across the globe, a panel of judges have now selected Forget Them Not by Aberdeen maker Gordon Burnett to be the centrepiece of the Remembrance Hall when it re-opens in 2017.

Gordon's proposal was chosen for its evocative message of remembrance but also of hope. 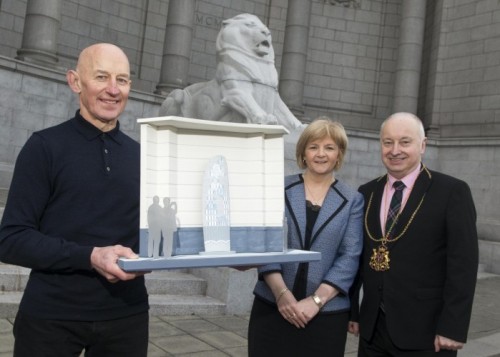 Aberdeen City Council Leader Councillor Jenny Laing said: "This design is a fitting contribution to what is one of the city's most important buildings.

"It offers powerful symbolism which will allow members of the public to reflect and think about the wide reaching impact of conflict.

"I'm also very proud that Mr Burnett, through the use of granite, has represented Aberdeen's heritage and history which will speak volumes to the public.

"The concept once again highlights the importance of the Inspiring Art and Music redevelopment project, which is creating an interactive, educational cultural complex for the city. I encourage everyone who is inspired by Gordon's vision to support the campaign by making a donation."

The artwork will be 3.5m high by 1.1m wide and made from stainless steel, sitting on a dark granite base.

It will be clad with light and dark grey granite and marble pieces and shaped to resemble a Spitfire wing to symbolise conflict in the air.

The material, granite, symbolises conflict on the land. A wave motif at the base will represent conflict at sea.

Over 1,100 jewel-like, blue enameled Forget-me-not flowers will adorn the sculpture to symbolise memory and remembrance. 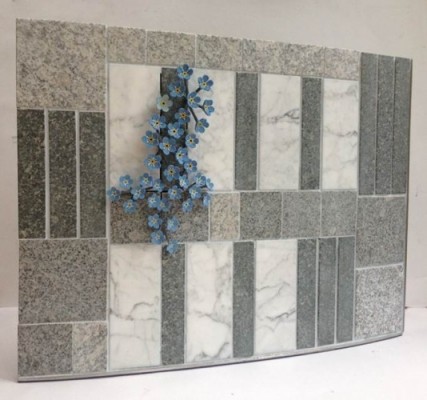 Gordon Burnett was born in Fraserburgh. He began his career as a 16-year-old apprentice lettercutter working in the granite trade. After six years, he studied to become an art student at Grays School of Art and recalls drawing the special architecture of the Hall of Remembrance.

Mr Burnett, went on to study a Masters at the Royal College of Art London, returning to Aberdeen in 1988 as Head of Jewellery at Grays school of Art and retired in 2011 as Reader in Craft.

He has exhibited around the world, including in Melbourne and Tokyo, a number of Gordon's pieces feature in Aberdeen Art Gallery's collection.

He said: “This commission is important for the whole of Aberdeen and throughout the process I was very conscious that the artwork is intended to encourage visitors to reflect and contemplate within the revitalized Remembrance space.

“I began my career working with granite and have cut many inscriptions on War memorials - and I've been able to draw on those experiences and appreciate the importance of remembrance.

“For me remembrance is a response to loss with an intention not to forget, stirring feelings of hope for a better future and I think the Forget-me-not flowers encompasses those emotions.

“As an Aberdeen artist, I am hugely supportive of the redevelopment of the Art Gallery, Cowdray Hall and Remembrance Hall and the economic and cultural benefits it can bring to the city and wider north-east.”

The selection panel was made up of Aberdeen Lord Provost George Adam, Art Gallery and Museums Manager Christine Rew, Head of Collections Helen Fothergill, Curator of Fine Art Liz Louis as well as a veteran and a serving member of the armed forces.

Aberdeen Lord Provost George Adam said: “It was an incredibly inspiring experience to be part of this process and to see the submissions from artists across the world and the different ways they tried to capture remembrance.

“Certainly the winning submission has all of the different elements of the brief that we were looking for and will be a wonderful addition to the Remembrance Hall for the people of Aberdeen.

“I'm proud that we are representing each and every member of the armed forces with such a powerful piece of artwork.” 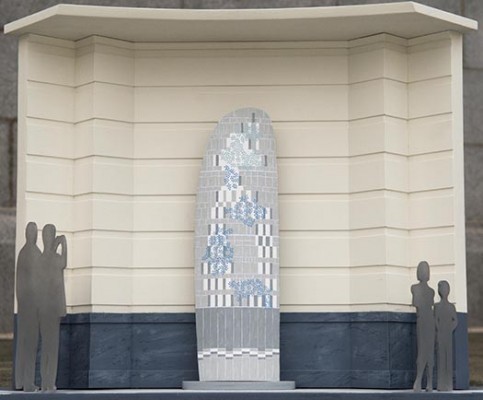 Work is also ongoing within the Remembrance Hall to create a fully digitised version of the City's Rolls of Honour, focusing on lives lost during the First World War to mark the 100 year commemoration.

Names of Aberdonians who lost their lives will be projected on the wall opposite the new commission.

The digital project will give visitors the opportunity to actually see people's names associated with each conflict, including civilian and merchant navy causalities.

Similarly, a new digital exhibition, Gallery of Memories, will be available to visitors on the Remembrance Hall balcony when it reopens next year and will feature stories from people who live or lived in Aberdeen during times of conflict.

Revealed: Forget Them Not – A new public artwork for Aberdeen’s Remembrance Hall