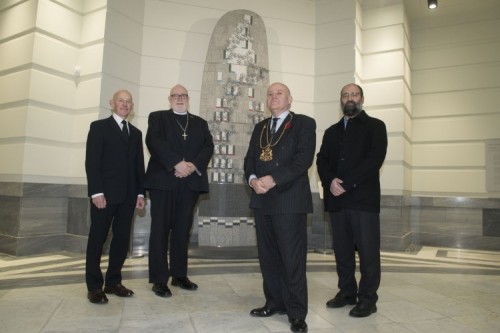 Aberdeen’s war-time roll of honour and Remembrance Hall have been rededicated during a special Armistice Day service.

Veterans and serving representatives from the armed forces were among those who attended the commemoration led by the Lord Provost of Aberdeen Barney Crockett this morning. A silence was observed at 11am to remember the fallen.

The Remembrance Hall reopened to the public on 2 November as part of the Aberdeen Art Gallery redevelopment project.

The sympathetic restoration of the space includes the addition of the specially commissioned piece Forget Them Not by Aberdeen artist Gordon Burnett.

The city’s roll of honour has been digitised as part of the project, with names of the fallen projected in a striking display opposite the new artwork in the Remembrance Hall.

A newly created video, charting Aberdeen’s role in conflict and the sacrifices made by those connected to the city, also forms part of the restoration and is projected onto the floor of the hall at regular intervals each day. The Gallery of Memories, on the Remembrance Hall’s first floor balcony, has also been created and features stories from times of conflict.

The Lord Provost said: “The Remembrance Hall is of historic significance to Aberdeen and the rededication service is a fitting way to have marked Armistice Day. Having a space for reflection, contemplation and the commemoration of all who gave their lives in conflict is an important part of the fabric of life in Aberdeen and the reopening after redevelopment is very welcome.

“The Remembrance events have been impeccably observed in the city and once again have put into focus the sacrifices of the past and the courage of the present as we pay our respects to the fallen, those injured in conflict and also to all who continue to serve.”