Proposals are to be explored for a transformational residential development in the heart of Aberdeen as part of the next stage of the City Centre Masterplan.

Aberdeen City Council has allocated £500,000 to assemble a team to progress the vision for Queen Street as well as actions aimed at increasing the number of city centre homes.

The City Centre Masterplan, which was unanimously approved by Council in 2015, envisages Queen Street as a new mixed-use neighbourhood with a cultural component.

The site footprint includes Police Scotland; Scottish Courts and Tribunals Service; Aberdeen City Council (Town House extension – pictured below – and city mortuary); and the University of Aberdeen. A draft development framework, which has formed the basis of discussion between public sector partners, is being finalised. 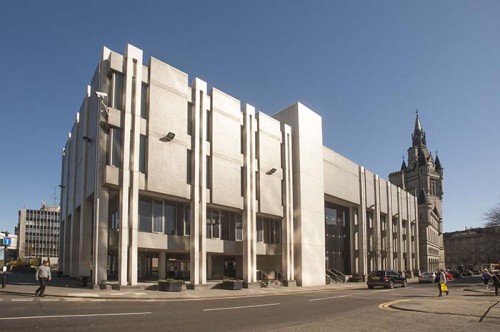 Options could include building a new city mortuary at Foresterhill Health Campus; the possible demolition of the Aberdeen Police Scotland headquarters; the relocation of the Council Chamber to the Mitchell Hall at the rear of Marischal College or alternatively using the Kings College conference facilities; and creating a new justice centre for Scottish Courts and Tribunal Service.

The redevelopment of Queen Street could allow the Council and Police Scotland to co-locate within the Council’s property estate to offer a multi-agency service.

“Increasingly businesses are returning to city centres and we can do our bit by helping deliver homes, improving the public realm, and creating the conditions where communities and commerce can flourish.

“We have a unique opportunity in Aberdeen to do something really special by working with public sector partners to create a dynamic, inclusive urban quarter, whilst at the same time improving our own services.

“With Queen Street and other developments in the pipeline, Aberdeen can be at the forefront of the international drive to attract new investment from which the city and residents can benefit enormously.”

The Council is to hold a Developers’ Day to share opportunities and expectations around Queen Street and other major capital projects coming forward.

The City Centre Masterplan, a 25-year regeneration blueprint, aims to deliver 1,500 new homes and boost the population by 3,000.

Masterplan projects have included the Marischal Square hotel and office complex and the redevelopment of Broad Street as well as the regeneration of Union Terrace Gardens, which is currently out to tender.

The redevelopment of Queen Street would be part of the Queen’s Square intervention area, conceived in the Masterplan as “an exemplar of the best of urban living in a sensitive historic context”.

Proposals for the next stage of delivery of the Masterplan – approved this week by the City Growth and Resources Committee – were informed by the City Centre Living Study, which had recommended that the Council form a dedicated city living team and treat Queen Street as a flagship project.

The study said a moratorium on affordable housing contributions from developers could help offset the financial risk associated with city centre development.

Today the Planning Development Management Committee supported a recommendation from officers to waive the affordable housing contribution in the city centre for the next two years.