Pupils get on their bikes

Pupils at an Aberdeen school got on their bikes to take part in a sponsored cycle.

The Middleton Park youngsters cycled near the school as part of European Mobility Week. This is the first time that a school event of this nature has taken place in Aberdeen, where pupils are to cycle a short course near the school.

The European Union-backed European Mobility Week campaign promotes sustainability and cities are encouraged to take part by signing up to the campaign and pledging to raise awareness by holding events and implementing permanent measures. Aberdeen City Council Transport and Regeneration Spokesman Councillor Ross Grant signed the agreement for Aberdeen's participation.

The campaign ran in Aberdeen from 12 September to 22 September and included In Town Without My Car Day on Sunday 20 September. 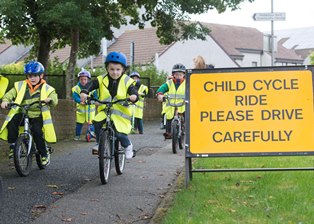 The theme of the national campaign is 'Choose. Change. Combine.' to encourage people to use multiple modes of alternative transport to driving alone, for example taking a bus and then walking a short distance to their destination.

The City Council is holding a series of events to inspire people to try alternatives to using their cars, along with installing a permanent measure to help them to opt for a sustainable mode of transport. It also held the In Town Without My Car Day so city centre streets were open to the public to enjoy.

Aberdeen City Council Regeneration and Transport spokesman Councillor Ross Grant said: "The youngsters have made a fantastic effort and looked like they had lots of fun today on their bikes.

"These fun events are being held to encourage people to see what they can do, and how easy it can be to get around on your bike or by walking for many journeys."

Jenny Watson, headteacher of Middleton Park School said: "Our cycle event has launched our health and wellbeing action plan for this session. All of our pupils from the youngest nursery to Primary 7 all took part in a variety of different cycling activities throughout the day. Despite the rain, the pupils, staff and parents were fantastic and put 100% effort into all the activities. It was a great way of getting all our pupils active as well as thinking about the importance of conserving energy."

Pupils get on their bikes