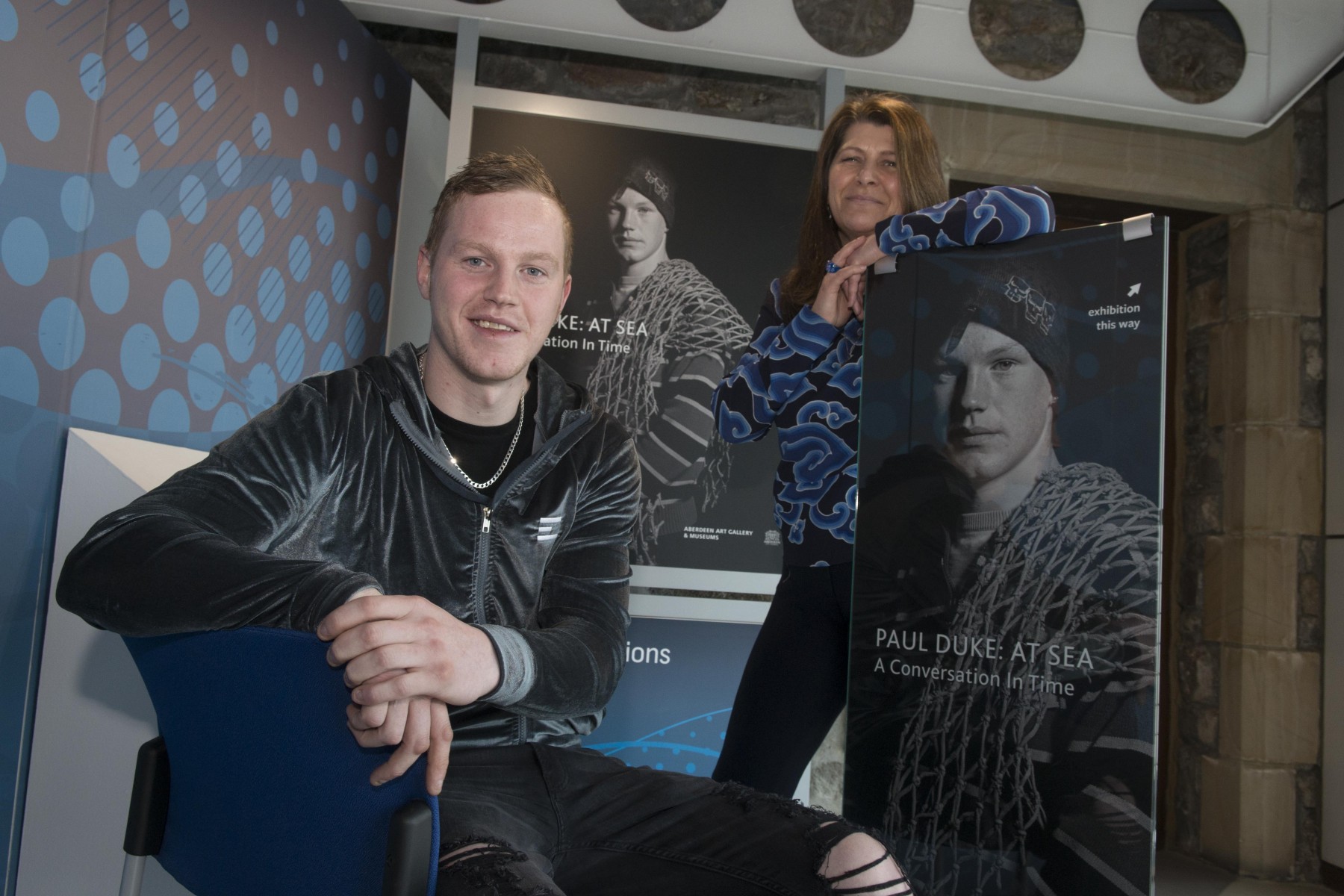 Derri 2
22/02/19 DERRI WILSON and Councillor Marie Boulton Derri Wilson will be at Aberdeen Maritime Museum at 12noon on Friday 22 February, where he will be photographed by Norman Adams with Cllr Boulton (it would be good to get shot outside the building with the vinyl, also next to the portrait of Derri in the exhibition space).The exhibition PAUL DUKE: AT SEA A Converstion in Time continues at Aberdeen Maritime Museum until Sunday 28 April 2019.Derri Wilson’s portrait is part of a series of works by London-based Scottish photographer Paul duke, from his magnificent series At Sea, which documents north-east Scotland’s fishing communities at a time of sharp decline.These striking portraits were made over a three-year period, taken in harbours, shipyards and factories.

The subject of one of Paul Duke’s stunning photographic portraits at the Aberdeen Maritime’s At Sea exhibition came face to face with his own image today (Friday 22 February).

Derri Wilson’s portrait is part of a series of works which documents north-east Scotland’s fishing communities at a time of sharp decline. These striking portraits were made over a three-year period, taken in harbours, shipyards and factories.

The team at Aberdeen Art Gallery & Museums selected the 2013 image of a 16-year-old Derri as the lead promotional image for the exhibition.

Derri no longer works on the boats but is a floor layer in Inverurie and now lives in Aberchirder.

About coming face-to-face with his portrait, Derri said: “It’s cool to see my portrait up close for first time.

“Now and again, I do miss being out on the boats but now that I have a young daughter its better to be on dry land!”

Councillor Marie Boulton, Aberdeen City Council’s culture spokesperson said, “It was wonderful to meet Derri today and hear about his time at sea.

“Paul Duke’s striking portrait of Derri is one of several magnificent images in the exhibition and a powerful reminder of the impact of the sea on the men and women of Aberdeen and the North East”.

Paul Duke said: “Meeting Derri and hearing his particular story undoubtedly helped shaped the narrative of At Sea. The portrait of him acts as representation for many other young local people like him at that time - young people who sustained a working culture in fishing, despite the waning of the industry."

Duke’s images are complemented by his selection of works from the collection of Aberdeen Art Gallery & Museums by artists who have turned to the sea for inspiration, including John Bellany, Joan Eardley, Alexander Fraser and Prunella Clough.

Paul Duke was born and educated in Edinburgh. He gained a Master of Arts degree with distinction from the Royal College of Art, London, in 1989. He lives and works between London and Scotland and has been teaching photography for over 20 years. His work is held in private and public collections, including Aberdeen Art Gallery & Museums.

In 2016 Duke received the prestigious Royal Scottish Academy Morton Award, an annual prize for a lens-based media artist to complete a new body of work: No Ruined Stone was exhibited recently at the St Andrew’s Photography Festival.

Paul Duke: At Sea A Conversation in Time runs until 28 April 2019 at the Aberdeen Maritime Museum. Admission is free.For visiting information go to www.aagm.co.uk