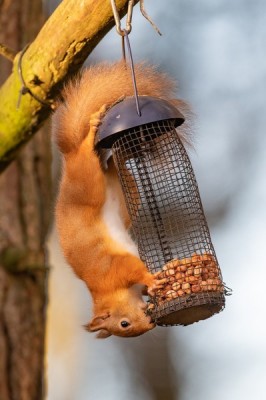 Aberdeen City Council Countryside Rangers today asked people not to leave out feeders and food for red squirrels and birds in Carnie Woods as they are attracting rats.

The number of rats in the area has significantly increased and they have even been spotted during daylight hours so the feeders in the woods are to be removed to try to manage the problem. Anyone who wants to keep their feeder should remove it themselves in the next week.

At this time of year, there is plenty of natural food for our woodland wildlife as trees and bushes are producing cones, nuts, fruits and seeds, along with fungi which are all great food for red squirrels and many birds.

Carnie Woods near Westhill is a very popular woodland with visitors and wildlife and is probably best known as one of the easiest places to see red squirrels close-up - they become used to people and it is great for photographers to get some wonderful shots.

Over the years, local people have put out feeders and food for the squirrels and birds but in recent weeks the Aberdeen City Council Countryside Ranger Service, the local community group for the woods, and members of the public have noticed alarming numbers of rats visiting these feeding stations.

The rats have been spotted at the feeding stations even in broad daylight and they are becoming increasingly bold too.

Aberdeen City Council Countryside Ranger officer Ian Talboys said: “We would ask people not to put out large amounts of food for the squirrels or birds as it is not necessary to support sustainable populations of birds or squirrels in the woods.

“Putting out small quantities is fine to attract the animals in to watch or to photograph them and we know a lot of people get a lot of enjoyment from this. The large amounts that have been put out in recent weeks are causing concerns.

“With residential and business premises so close to the woods we don’t want the rats to move closer to where people live or work and cause problems or damage to property.

“Rats do carry diseases which are harmful to people too. Hopefully be removing the food source they are exploiting at the moment, they will disperse to the wider countryside.”

The local community group for the woods is also supporting the active to remove the feeders from the woods.