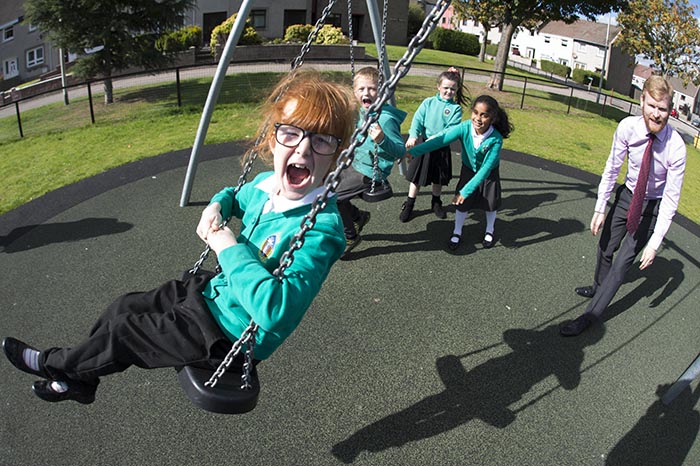 ACC_4057FB
12/09/18 Pupils from Riverbank Primey 3 take advantage of the new parks. On the swings Anya Killoch (7), and Augustas Spachwiete, pushed by L-R Ellie Smith and Kavya Mathviena ALL 7 YO A total of 14 playparks around Aberdeen are to be refurbished in the next financial year as part of a rolling programme to revamp scores of of playparks around the city.They bring the total of refurbished playparks to about 100 since the project began five years ago.

They bring the total of refurbished playparks to about 100 since the project began five years ago.

Aberdeen City Council regeneration spokesman Councillor Ross Grant said: “We are delighted to once again have a programme of refurbishments to our playparks as this has been a fantastic project which has benefited communities all around the city.

“Our city’s green spaces and play equipment help to keep our youngsters fit and healthy, and we also know how much fun the youngsters (and the adults they take with them) have at these places.

“We look forward to watching the new round of playparks being refurbished in the next year.”

The sites that are earmarked for development for 2018/19 have been split into two different phases - phase one sites are small scale projects that are generally replacing play equipment on a ‘like for like’ basis, and phase two sites are larger projects and the City Council will hold some local consultations into the potential designs.

The equipment for the phase one sites has been ordered and all sites are due to be complete before the end of the year, depending on weather conditions. All existing equipment will be removed soon to make way for the arrival of the new kit.

The phase 2 sites are larger projects and include Regent Walk, Gallowgate, Middle Brae, Cruikshank Crescent, Eric Hendrie Park, Rosemount Square, and Powis Crescent. The limited consultations for these are being held at:

Gallowgate - Gallowgate Community Room on Thursday 20 September, from 9.30am to 12.30pm;

Cruickshank Crescent - Beacon Community Centre on Monday 24 September, from 9.30am to 12.30pm;

Rosemount Square - Rosemount Education Centre on Wednesday 26 September, from 10am to 3pm;

Powis Crescent – no consultation required as the majority of spend at this location will go towards an all-weather surface at the ball court;

Heathryfold- a big new play area will go in at this location as part of the much bigger Middlefield Project at Heathyburn Park. Consultation for this location will be carried out by the community development team which has been working on this project.

The plans for all the phase two sites will be taken into local primary schools where some children will get the opportunity to comment on plans and vote for their favourites.

Feedback from consultation events will be included as part of the decision-making process for each site.

The refurbishments of playparks started in 2013/14 and have continued in each subsequent year. In time we hope that refurbishments will continue as a rolling programme. The programme of work also includes an annual play equipment audit.

The refurbishment of the playparks have been taken forward on a priority basis, while ensuring there is an even spread to communities all over the city.