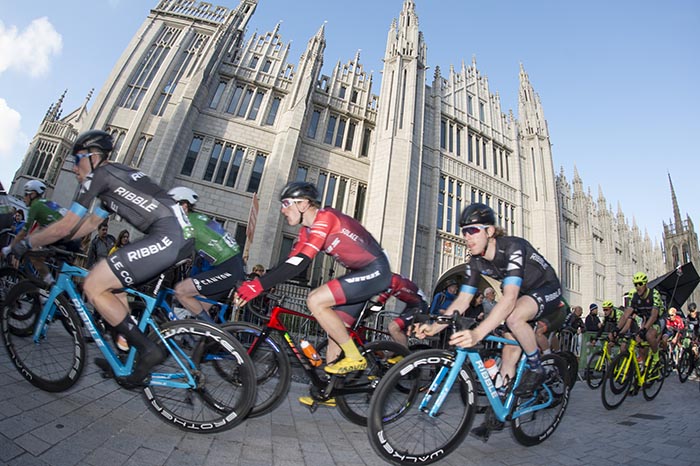 Aberdeen City Council and Aberdeenshire Council have unveiled plans to bring cycling’s Tour of Britain to the north-east from 2020.

Councillors from both local authorities will consider reports on the joint bid at separate meetings in June, with the recommendation to approve the plans. Papers detailing the plans have been published today.

The region has a strong track record in cycling events. Aberdeen City Council has hosted the spin-off Tour Series for the past three years, attracting tens of thousands of spectators whilst Aberdeenshire is home to the annual Ride the North event which welcomes approximately 900 riders to the 175-mile-round route.

Data indicates that the Tour Series had a positive economic impact with increased footfall and spend. Discussions have been held on how to grow and maximise the impact at a regional level for the economy, tourism and for health and wellbeing.

Aa a result, Aberdeen City Council and Aberdeenshire Council have joined forces to secure the option to host the final stage of the Tour of Britain in 2020 and the event’s Grand Depart in 2021.

The Tour of Britain features 120 of the world’s top cyclists each year and is Britain’s biggest and most prestigious road cycling event, with crowds lining the stage routes and exposure to international audiences through broadcast coverage in over 170 countries worldwide.

“Both councils are partners in a Regional Economic Strategy which has diversification and internationalisation at its core, with ambitions to build on the north-east’s reputation as a destination. Attracting world class events is central to our plans.

“The opportunity to host the Tour of Britain is a natural progression following the success of the Tour Series, which has won the hearts of the residents and visitors over the past three years.

“The Tour Series played an integral part of the Council’s wider Aberdeen 365 events strategy, with significant investment changing the cultural outlook of the city. With the countdown to the opening of the redeveloped Aberdeen Art Gallery and P&J Live events complex, it is an incredibly exciting time and we continue to explore new opportunities to attract new audiences to the region.”

Cllr Jim Gifford, leader of Aberdeenshire Council, said: “Aberdeenshire is known internationally as a cycling destination. The scenery and spectacular landscapes make this a go-to place, both at a personal and event level. Being able to secure a leg of the Tour of Britain will further cement our place on the map.

“It will also have wide-ranging benefits to our economy, drawing in visitors and securing the sort of exposure that the coverage of an event like this brings. We are confident that when people see Aberdeenshire in this setting it will encourage repeat visits, and this will have knock-on effects on a number of industries and locations.

“I look forward to the result of these discussions at a committee level and it is my hope that we can work with the wider region to maximise this opportunity.”