Aberdeen has joined an international peace project to grow seeds from atomic bomb-damaged trees  70 years after the nuclear attacks on Japan at the end of World War Two. 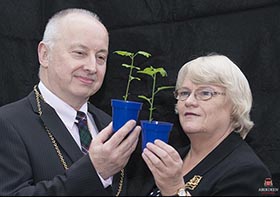 Mayors for Peace, based in the Japanese city of Hiroshima where the first atomic bomb was dropped, offered the ginkgo tree seeds to the city's Lord Provost, George Adam, as part of the United Nations Institute for Training and Research 'Green Legacy Hiroshima' initiative to spread the seeds and saplings worldwide.

The seeds sent to Aberdeen come from a 250-year-old ginkgo tree, which stands in Hiroshima's Shukkei-en Garden  less than a mile from the epicentre of the atomic blast which obliterated the city on 06 August 1945. The tree survived the explosion and subsequent fires, sprouting new buds from the burnt and distorted trunk, and lives to this day as a lasting reminder of hope and peace.

The team of gardeners at Duthie Park have successfully germinated six of the seeds, which were sent chilled from Japan to mimic the overwintering which they require before sprouting. The ginkgo trees, which are noted for their beauty, could be planted in the city's parks and at other iconic locations around Aberdeen  but not immediately, as they are just six inches tall at present.

The Lord Provost said: "The fact that new life could grow from something so devastating gave people in Hiroshima hope and courage that their lives could go on. Aberdeen has such strong links with Japan so it is fitting that in this 70th anniversary year we use these seeds to grow symbols of hope for peace around the world." 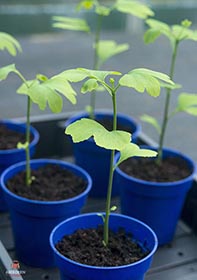 Communities, Housing & Infrastructure vice-convener Councillor Jean Morrison added: "The beautiful full-grown trees which will grow from these saplings will be a very special addition to the Granite City, which is already noted for its horticultural splendours. They will carry a huge amount of meaning, having come from a tree which survived the atomic  blast, and I am sure the people of Aberdeen will take them to their hearts."

Formed in 1982, Mayors for Peace is a group of cities from around the world which have formally expressed support for the abolition of nuclear weapons. Aberdeen City Council joined the organisation in 2010.

The tree, which is also known as the maidenhair, is a unique 'living fossil' species which can be traced back 270 million years. For centuries it was believed to be extinct, until groves of the trees were discovered in central China.

Ginkgos are large trees which can reach heights 60100 feet, with leaves which turn bright yellow in autumn. They grow well in urban environments and are hardy, insect-resistant and largely disease-free. They have uses in traditional medicine and as a source of food.