A City Centre Masterplan project is on course to have Union Street sparkling for Spring.

Aberdeen City Council crews have been hard at work since the launch of Operation Union Street Rejuvenation last September.

A dedicated team, in branded uniforms, have been carrying out cleaning and repair work, and also reporting problems like missing street signs and damaged guttering to other Council teams.

The Edward VII statue (below) on the corner of Union Street and Union Terrace Gardens has also been washed. 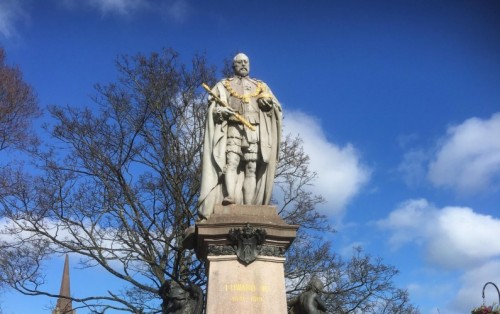 The first deep-clean of the year is planned for early summer. At similar blitz was carried out by specialists at the start of the Operation, when more than 250,000 pieces of ground-in chewing gum were removed.

“As we move into Spring, their efforts are there for all to see. The City Centre Masterplan recognises Union Street as the heart of the city.”

Last year the Council set aside £2 million for the drawing up of designs for Union Terrace Gardens, Operation Union Street Rejuvenation, and other city centre projects.

“Union Street is in better shape, the pavements are cleaner, and the granite is glistening again.”

The Operation is being led by the Council and Aberdeen Inspired, the operator of the Business Improvement District.

Aberdeen Inspired chief executive Adrian Watson said: “We’re grateful for the support of some of our businesses who have grabbed the initiative and shown real civic pride in helping keep our city centre clean.

“We’ve also seen a change of attitude from the public, and we need that buy-in to make improvements sustainable.

“Aberdeen Inspired will continue to develop this collaborative approach as we all have a part to play in enhancing our city centre.”