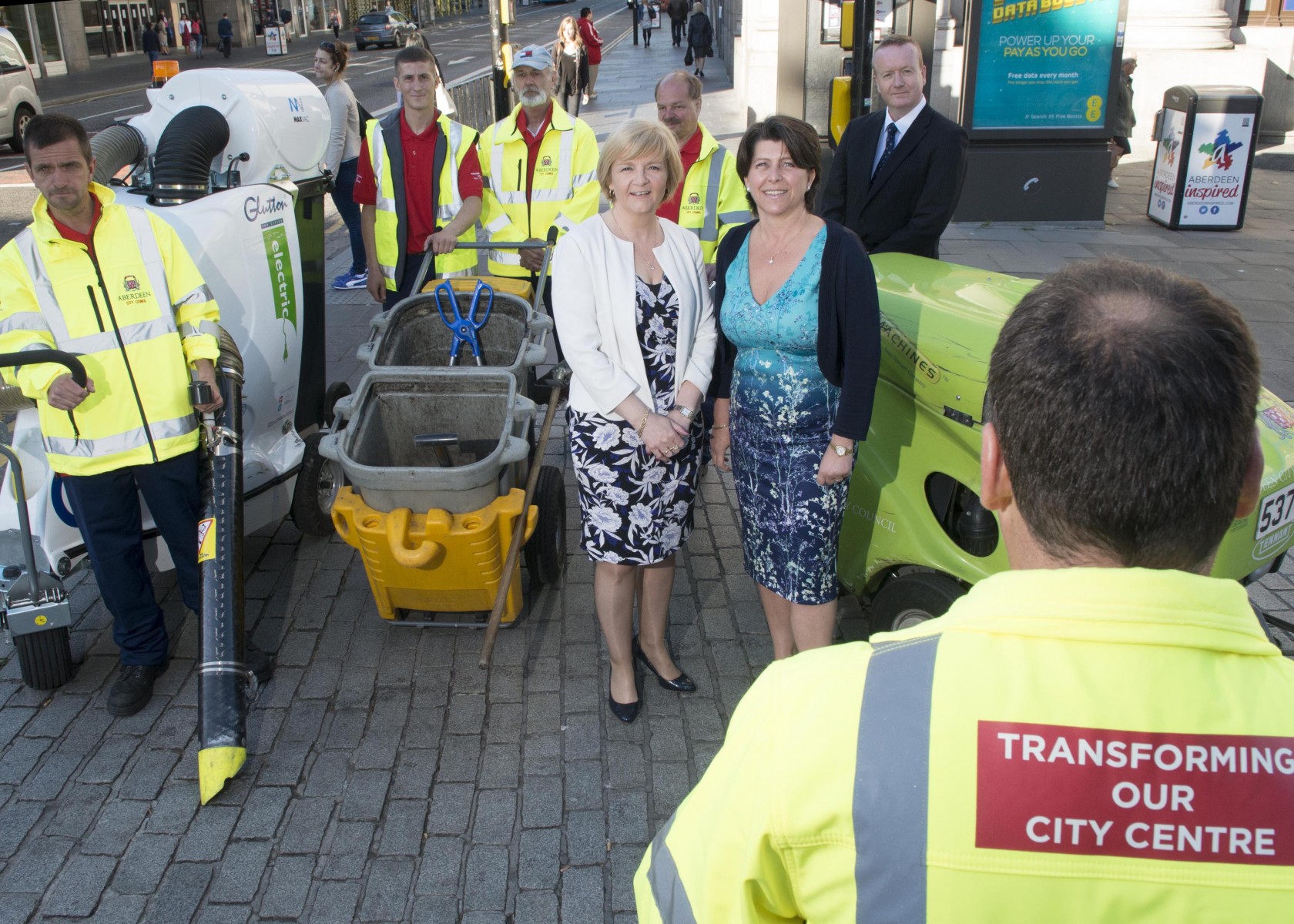 The first phase of a programme to regenerate Union Street under the Aberdeen City Centre Masterplan was launched today (September 1).

Aberdeen City Council is to spend more than £1million on a range of measures aimed at restoring the majesty of Union Street, including a deep clean and improvements to street furniture.

The Council has also created a Hit Squad dedicated to keeping Union Street in top condition. The team of four combine specialist skills that will allow them to clean, fix and paint any fixtures or features which fall into a poor state, complementing existing work to keep the street at its best.

Operation Union Street Rejuvenation is being led by the Council and Aberdeen Inspired, operator of the Business Improvement District, and will take place over the next nine months. Longer term plans include preserving historic buildings and pedestrian priority on a section of Union Street.

Council leader Councillor Jenny Laing said: “Operation Union Street Rejuvenation is something everybody can get behind and represents yet another major step forward for the City Centre Masterplan, which will transform Aberdeen over the next 25 years.

“The Rejuvenation programme promises to bring benefits for all – residents, visitors, businesses and investors – and once under way will help revive civic pride in the fabulous asset that is Union Street.”

Deputy city council leader Councillor Marie Boulton, who chairs the cross-party City Centre Regeneration Board, said: “Many people who took part in the City Centre Masterplan consultation asked that Union Street be made a priority project.

“We responded to that call by agreeing a package of works totalling more than £1 million to clean and enhance the historic heart of our city.

“We want to bring Union Street back to the standard expected for the main thoroughfare of a leading energy city through an increase in economic and social activity. This is the start of a journey to transform Union Street and the rest of the city along with it.”

Adrian Watson, chief executive of Aberdeen Inspired, said: “We are delighted to be playing a part in the transformation of Union Street through our partnership with Aberdeen City Council. We believe that the significant funding from the council, along with assistance and ideas from Aberdeen Inspired will combine to make crucial improvements that are needed.

“Operation Union Street Rejuvenation is a fantastic example of organisations such as Aberdeen Inspired and the city council working together to make a difference. It is our goal to bring back a sense of pride to Union Street and we are confident this can be achieved through this project.”

The Council has today [September 1] contacted the owners and occupiers of properties on Union Street appealing to them to support efforts to make the mile-long street sparkle again by maintaining their buildings and frontages to the highest possible standard.

The deep clean of Union Street is scheduled to take place next week and will involve a general power wash of all pavements, doorways and street furniture – signs, bollards and benches – as well as the removal of chewing gum.

Other measures to be carried out as part of Operation Union Street Rejuvenation include:

• A professional clean of St Nicholas Kirkyard façade (Smith’s Screen) and painting all railings and gates, highlighting the detail in gold leaf

• Resurfacing of the south pavement of Union Bridge

• A survey to ascertain the condition of buildings on Union Street

• Recruiting a building standards officer for one year.

Efforts will be made to encourage greater use of empty retail and other business units through the delivery of a more attractive streetscape.

Aberdeen City Council is also bidding for £1.5 million from Historic Environment Scotland to help repair and preserve key buildings on Union Street. The Council has in principle set aside £1.5 million of its own money as match funding should the Conservation Area Regeneration Scheme bid be successful.

Martin, an environmental operative, said: “It’s about keeping the city clean and tidy and helping improve Aberdeen. The new machines are a great help to us.”

Jiri, a painter and joiner, added: “We want to make everything feel fresh and better.”

Graeme Forsyth, Area Supervisor for the city centre, said: “We’ve got a dedicated team to transform the appearance of the city centre. They should be able to deal with anything from dirty fascias to damaged street furniture.”