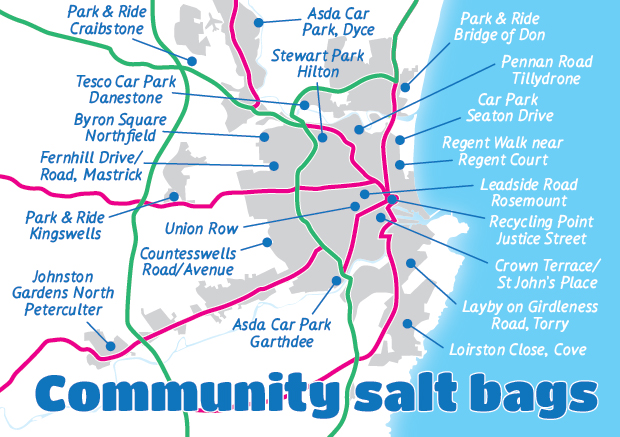 One tonne community salt bags have been placed at convenient locations around Aberdeen for people to use when spreading salt on public roads and pavements.

Community-minded folk who can help out make a big difference when it is icy or snowy as unfortunately City Council staff cannot be everywhere at all times.

The locations are at the Park & Ride at Craibstone, Asda car park at Dyce, the Park & Ride at the Bridge of Don, Tesco car park at Danestone, Byron Square in Northfield, Stewart Park in Hilton, Pennan Road in Tillydrone, the car park on Seaton Drive, Fernhill Drive/Road in Mastrick, Regent Walk near Regent Court, the Park & Ride at Kingswells, Union Row, Crown Terrace/St John’s Place, Leadside Road in Rosemount, the recycling point on Justice Street, Johnstone Gardens in Peterculter, Countesswells Road/Avenue, Asda Car Park in Garthdee, a layby on Girdleness Road in Torry, and Loiston Close in Cove.

The bags will be replaced by new big community salt bins at the 20 locations after the festive break and there are also about 900 grit bins around the city for residents’ use. Residents were again this year encouraged to apply for a one-tonne community salt bag before the cut-off date of 1 November, and a total of 273 bags were delivered.

Other resources include about 180 staff, and half of the city’s roads treated before 7.30am.

Aberdeen City Council transport spokesman Councillor Ross Grant said: “It’s been quite a mild winter so far and while we’re hoping this will continue, traditionally snow and ice appear in January and February.

“Our communities have been very willing in recent years to help and get involved, so since we cannot be everywhere at the same time, we have created more opportunities to enable residents who want to do their bit for their community and this year, for the first time, it includes making larger amounts of salt available in communities.

“We’d ask residents to be prepared themselves, by carrying out journey planning, ensuring they have the right equipment for their journeys, and having an alternative plan for transport if possible.

“Aberdeen City Council wants to keep roads open and residents safe and I’d encourage people to look up information on our website at www.aberdeencity.gov.uk/winter, keep a close check on weather forecasts, plan appropriately, and adhere to police and travel advice.”

The local authority has previously approved a budget for winter and emergencies of £1.73million to ensure that the city keeps moving. That sum might not be all used, or can go over, depending on the severity of the winter. Early morning and standby gritting operations started on 16 November and last until 20 March although the gritting is only carried out when the road surface temperatures are low or the forecast is for adverse weather conditions.

Almost half (47%) of Aberdeen’s roads are treated before 7.30am, with 560 miles of roads in the city, slightly more than the distance from Aberdeen to London. Weather forecasts are closely monitored throughout the day and night, and gritters and ploughs can be out 24/7.

For roads, the 10 primary routes which are treated first are the main transport routes through the city and include major bus routes, roads at Aberdeen Royal Infirmary, and roads near fire stations. The primary routes make up almost half of Aberdeen’s roads network and are never impassable unless there are abnormal conditions. These are gritted early morning from 4.45am to 7am as the early morning gritting operations, to ensure they are salted before rush hour. The primary routes are pre-treated, and there is 24/7 availability of equipment/crews.

Secondary routes include roads near sheltered housing and social work properties, near schools where possible, cemeteries and crematoria, shopping centres, and access to facilities in parks and gardens. These are started after the primary routes have been completed, which is at about 7am.

More information can be found at www.aberdeencity.gov.uk/winter.