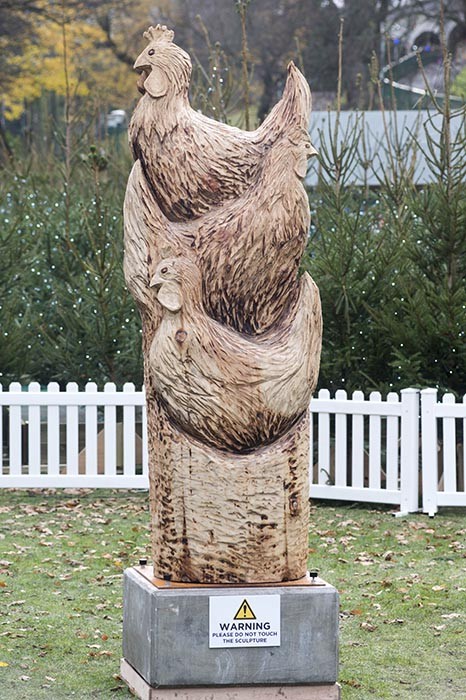 The project to create the eye-catching pieces has been led by local chainsaw wood carver Garry Shand.

The trail was launched on 24 November when the first three sculptures were put on display for visitors to the city centre to discover and enjoy.

The next group of three sculptures were put in position at the weekend as the new attraction continues to grow.

Standing at around two-metres tall and weighing two-tonnes each, the carving of each sculpture is sizeable task.

Garry has been helped by fellow chainsaw wood carver Simon Archer, from Wisewoodsculptor, in order to meet the project’s deadlines. Simon has brought his his own unique talents and interpretation of the song’s elements, creating the stunning A Partridge in a Pear Tree as well as two other sculptures.

Aberdeen City Council Depute Leader Councillor Marie Boulton said: “It is great to be supporting local artists and for their work to be engaging with a new audience at the heart of the city. The initial pieces have been very well received and there is great interest in the trail as it continues to expand through the festive period.

“The sculptures are a fantastic addition to this year’s plans and also an investment for the future. They will be a key part in Winter Festival programmes for years to come as we will be able to bring them out and locate them in different parts of the city to create a fresh trail each year.”

The sculpture trail will be on display until the end of this month and Aberdeen City Council is encouraging the public to share photos using #AbdnXmas. Further information on the Winter Festival is available at www.aberdeenchristmas.co.uk .