Nuart Aberdeen bursts into life for 2019 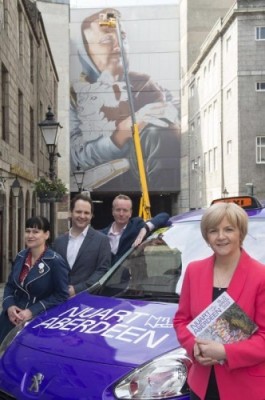 Thousands of people will descend upon the city centre this weekend as the globally renowned Nuart Aberdeen returns for a third year.

From large scale murals to artists working with tiles, stencils, LEGO and drilling into concrete, the festival is back on a monumental scale.

Throughout the past week a star line-up of 13 international artists have started work on diverse walls and locations across the city, with Smug and Vhils among the first to begin production. The festival opened today and runs through to Sunday.

Councillor Jenny Laing, Aberdeen City Council Co-Leader, said: “The launch of the 2019 festival is a fantastic occasion and it promises to be the biggest and boldest yet, with new artists adding a fresh twist to the legacy created over the past two years. We see all around us the impact Nuart Aberdeen has had on the city and the next four days will add to wonderful street art that has captured the imagination of visitors and residents alike.

“As a Council we are investing £300,000 over three years, working with Aberdeen Inspired to bring Nuart Aberdeen to life, and the return has been clear to see with the interest the festivals have created. As part of our ambitious Aberdeen 365 events strategy we have set out to expand the city’s cultural offering and in turn boost our worldwide profile as a destination, part of our wider economic aim of diversifying the regional economy. Nuart Aberdeen has been a major part of the great progress we have made and it’s a pleasure to be launching this year’s festival.”

Smug’s signature piece provided the backdrop to today's launch and completes the Green, which is where it all began for the festival in 2017 with the iconic Herakut mural.

Vhils has been drawing crowds throughout his production on Palmerston Road, drilling into concrete to create his homage to mark Aberdeen’s solidarity with striking Spanish seafarers in 1936.

This year Nuart Aberdeen has spread to locations mainly on the east side of the city, with signature works by Hush, Hama Woods, Dotmasters and Helen Bur focussed on or close to George Street.

As well as looking up at the large scale murals, visitors to Nuart Aberdeen will need to look down, as transformed electric enclosures, concrete planters and other familiar elements of the modern city appear courtesy of Evol. Jan Vormann is also making a playful mark on the city, brick by brick, with his much loved Dispatchwork project, which uses LEGO bricks to repair damaged walls and structures.

This year’s festival theme explores the importance of storytelling and its relationship to the city. Whether this is a city full of towering works of art gifted by visitors or laughing pensioners spray-painting their way to infamy, the festival and its art is open to each individual to interpret.

The Green will act as the heart of the festival with the public launch taking place at 1pm on Saturday and free guided walking tours departing from there. It will also be brought to life with Inspired Nights on the Green, which will serve up the best local street food, drink, music, entertainment and art all weekend starting at 4pm tomorrow.

Martyn Reed, Director and Curator of Nuart, said: “In-between the madness of a 10 day, 24 hour production, we’ve already been inundated with incredible narratives, funny stories, sad stories, inspiring stories and occasional dramatic stories. At the end of a long hard day, the crew of international guests and artists, local volunteers, partners, friends and extended Nuart family come together to share the day's stories. Some of these stories will stay with people forever, they will travel to all four corners of the globe and be told again and again and again, with all of these stories tied intimately to the city and people of Aberdeen. This year’s Nuart is based on “storytelling and the city” and we’re truly honoured to have been allowed to become a part of them, we’re looking forward to hearing new stories about local encounters with this year’s work.”

Adrian Watson, chief executive of Aberdeen Inspired, said: “Over the past two years Nuart Aberdeen has built a very special place in the hearts and minds of both locals and visitors from around the world. This year is shaping up to be another incredible edition of the festival and excitement has been building throughout the week as our fantastic line-up of superstar artists began to arrive and start work.

“The festival has a huge impact on the city and has played a big part in positioning Aberdeen as one of the UK’s emerging cultural visitor destinations. Watching the public’s reaction as artwork starts to emerge throughout the city is always special and I would encourage everyone to come along and soak up the atmosphere and everything on offer from today and over the weekend. We have a wide-ranging programme of activities on offer and this is a great chance to be a part of something truly unique.”

Tricia Walker, Partner at Burness Paul, said: “We see the positive effects of the festival in our own business with huge interest and engagement from our staff here in Aberdeen and across Scotland. This highlights the important role the festival can play in attracting the very best talent from around the world to the North East. In helping to achieve that the festival can have a legacy that could be seen for many years to come.”

Jillian Miller of the McGinty’s Group added: “There has been a real buzz in the city centre over the past week as production got underway for Nuart Aberdeen. The line-up of street artists that are a part of the festival this year are fantastic and it is been special to see them at work. The festival has put Aberdeen on the map and it is incredible to see the transformative effect it continues to have. We are proud to support it and are sure the crowds will be out in force to enjoy everything the launch weekend has in store.”

For further information on the programme visit: www.2019.nuartaberdeen.co.uk .

Nuart Aberdeen bursts into life for 2019