A new certificate for taxi drivers to show when they have a genuine medical exemption that prevents them from carrying assistance dogs in their cabs has been introduced by Aberdeen City Council.

Aberdeen City Council is the first local authority in the country to make such a move.

"We hope the decision will help people who require such support."

The move was welcomed today by guide dog owners who had led a campaign for the 'tactile certificate' to be introduced.

Mary Rasmussen, a local campaigner for visually impaired people, said: "We are very grateful to Aberdeen City Council as this was a real leap of faith on their behalf. 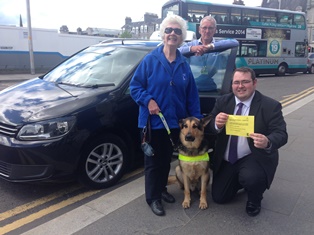 "It's always been a concern to us that we have no way of knowing if a driver who refuses to carry our dog has a doctor's certificate. Now, they will be issued with a certificate with an embossed 'E' in the corner that we can feel. It would be great if other local authorities would follow Aberdeen City Council's lead."

Drivers can be issued with this certificate if the licensing authority is satisfied that is appropriate to do so, on medical grounds. People who apply for exemption will be referred to a nominated medical practitioner for examination.

A spokesperson of Guide Dogs Scotland said: "Guide Dogs Scotland welcomes Aberdeen City Council's introduction of a new tactile certificate to indicate when taxi drivers have a genuine medical exemption that prevents them from carrying assistance dogs in their cab.

"Guide dog owners rely on their dogs for mobility and independence. This is recognised in the Equality Act 2010, which requires service providers not to discriminate against disabled people  including those with assistance dogs  in how they provide their service.

"We would like to thank guide dog owner Mary Rasmussen and her co-campaigners in Aberdeen for developing this initiative alongside the City Council."

Graeme McColl, of Aberdeen Taxi Group, said: "The new certificate has been endorsed by taxi driver. We welcome it as it removes any doubt from both the taxi driver and the passenger with an assistance dog."