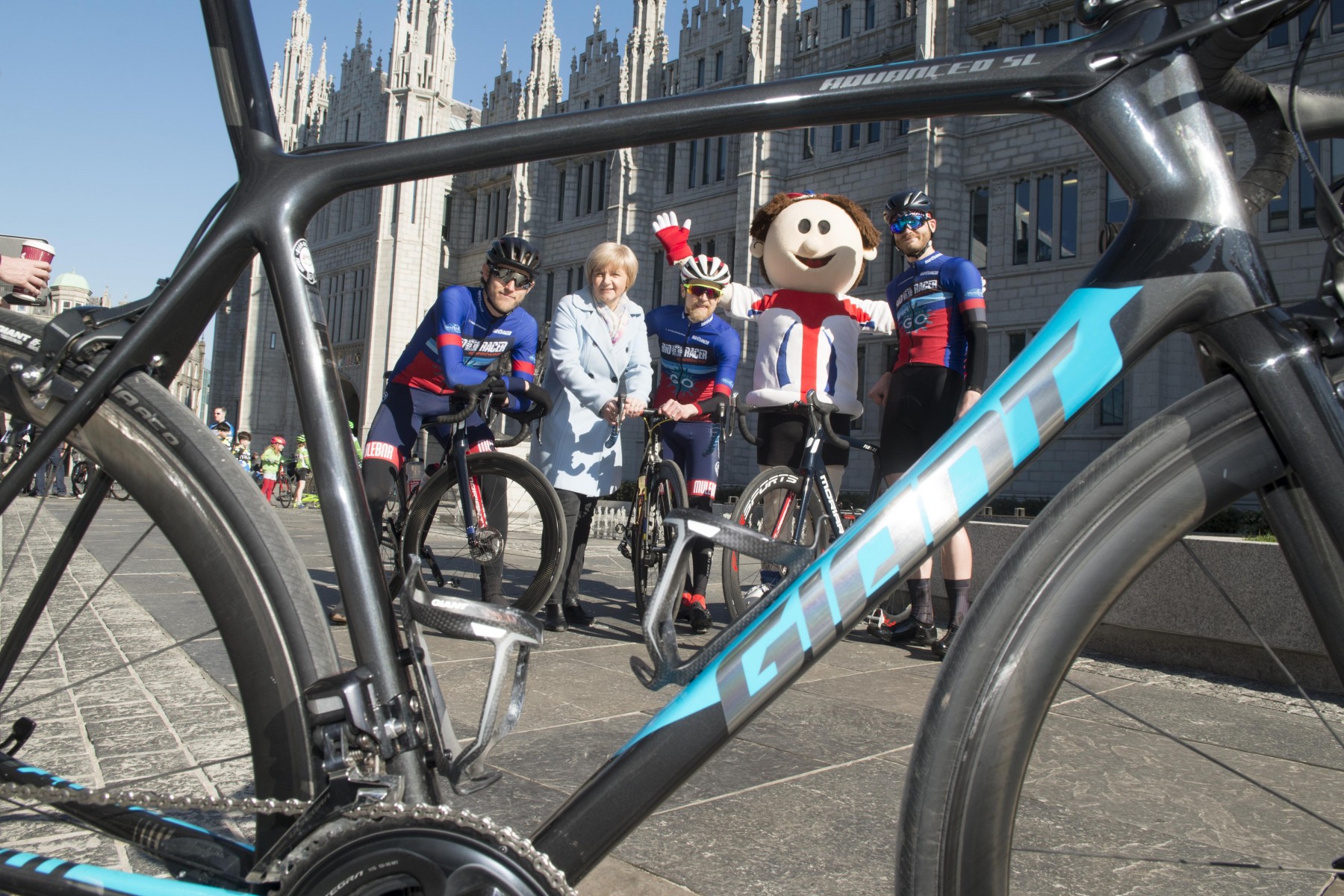 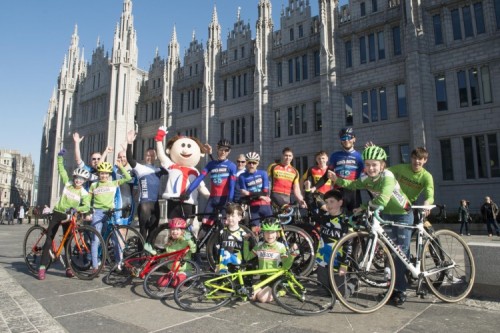 Marischal College will provide a stunning backdrop for the Aberdeen leg of the OVO Energy Tour Series as part of a new route announced for this year’s event.

The cycling showpiece on 16 May will bring professional riders to the city to test themselves on circuits of a 1.3km course and also offers amateur competitors, including in corporate and youth categories, to sample the unique atmosphere created by the Aberdeen crowds.

Thousands lined the streets in 2017 and 2018 and to mark the third appearance in Aberdeen a new route was revealed today (10 April) at a launch event featuring riders from the Scottish team Bioracer- Moriarty Bikes. The team will be racing in three legs this year, including Aberdeen, and was represented by Jamie Davidson, Thomas Gelati and Dave Reed. Talented local competitors also joined the launch event as the countdown to race day continues.

Riders will start and finish on Broad Street and race on a loop which takes in Union Street, Back Wynd, Belmont Street, Schoolhill and Upperkirkgate.

Councillor Jenny Laing, Aberdeen City Council Co-Leader, said: “The OVO Energy Tour Series has really captured the imagination of the north-east public and there has been an amazing atmosphere at the previous two events. I’m looking forward to another fantastic day as the 2019 series arrives in Aberdeen.

“We have invested significantly in our Aberdeen 365 events strategy, bringing world class attractions to the city. These draw visitors from near and far as well as raising the profile of Aberdeen as a destination. The Tour Series, which benefits from worldwide television coverage, brings all of those benefits and the new route we have announced today will ensure there’s a fresh feel.

“The old and new of the regenerated Broad Street, flanked by the historic Marischal College and award-winning Marischal Square, is a perfect showcase for the wider transformation of the city and it promises to be another wonderful occasion.”

Mick Bennett, Race Director of the OVO Energy Tour Series organising company SweetSpot, said: “Our previous two events in Aberdeen have been a fantastic success and we are sure that the new circuit will prove popular with spectators and riders, while also showcasing the fantastic backdrop of Marischal College.

“The support of Aberdeen City Council and Scottish Cycling will again create an amazing atmosphere and give cyclists young and old the chance to try out the new circuit.”

Ed Clancy, individual winner of the Aberdeen men’s race in 2018, who will be riding for the Vitus Pro Cycling p/b Brother team this May, said: “To win the Aberdeen round of the OVO Energy Tour Series last year was a fantastic experience. It’s not often that I travel so far north to race, and it’s great to have the opportunity to compete in new venues, in front of new crowds. We received a warm welcome in Aberdeen last year and, if I’m selected by Vitus Pro Cycling Team powered by Brother UK to race there this year, I’ll be delighted to return."

The 2019 event is part of a packed 12-month programme led by Aberdeen City Council, which will begin with Nuart Aberdeen later this month and will also include the opening of Aberdeen Art Gallery following its major redevelopment and the opening of The Event Complex Aberdeen.