The eight cars, two vans and a combi-van will bring the total number of Co-wheels vehicles available to hire up to 36 through the project, which has been backed by Aberdeen City Council. Of the 36, 16 are electric. 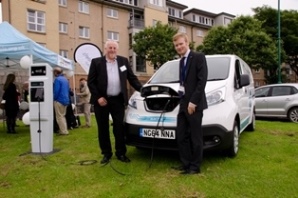 There are new locations for people to hire the vehicles, including Mastrick, Kincorth, Bridge of Don Libraries, and Danestone Community Centre.

More than 1,000 drivers in the city use cars from Co-wheels  which has more than 12,000 members nationally across more than 60 locations  giving Aberdeen one of the highest Co-wheels users rates in the UK.

The scheme, launched in April 2012, is an alternative to car ownership, with easy parking as the vehicles all have a designated parking space. It is often more cost-effective for motorists who normally do less than 10,000 miles a year.

The new vehicles include three electric Nissan ENV200 vans  one MPV combi-van in Gallowgate and two are panel vans at Satrosphere and Palmerstone Road. The cars are Renault Zoes at Golden Sq, Palmerstone Rd, Frederick St and Duthie Park along with the new locations in Danestone, Mastrick, Bridge of Don, and Kincorth.

The new Renault Zoe cars have about the same range as the current Nissan Leafs but can be charged in 1-2 hours instead of 4-plus. The vans were acquired after frequent requests from Car Club members and are expected to be used by people needing to move household items and by small businesses.

Funding has come from Transport Scotland through the Developing Car Clubs in Scotland programme, which has also helped fund a new charging infrastructure for the Car Club car plus an additional bay for public EV charging installed by Aberdeen City Council.

Aberdeen City Council Regeneration and Transport Spokesperson Councillor Ross Grant said: "The Co-Wheels Car Club has gone from strength to strength and there are now more vehicles in extra locations around Aberdeen. I'm sure the new vehicles will be well used, especially as we've worked with Co-wheels to respond to users' requests for vans.

"We hope more people will discover the benefits of using electric vehicles, which are better for the environment as they have less pollution and help to reduce road congestion in Aberdeen."

"Car clubs just like this are providing real opportunities for people to use electric cars and vans for the very first time, allowing them to experience just how quiet, clean and pleasant they are to drive. Aberdeen City and partners have set a high standard for others to follow, as was recognised by their recent win in the 'Contribution to Sustainable Transport' category at the Scottish Transport Awards; congratulations to all involved."

Richard Falconer, Operations Director at Co-wheels said: "Of the 36 vehicles now in Aberdeen, 16 of them are electric which gives Co-wheels Aberdeen the largest car club electric fleet in the UK.

"We are delighted that so many people in the city are joining up to this scheme. They are benefiting from the flexibility of being able to book a car for a short journey or a longer one at an affordable price with none of the hassle of car ownership or having to pick up keys from a hire company's offices. They can simply jump into a car from a city centre car bay and be on the move straight away. Co-wheels car clubs offer the option of occasional car use without the responsibility of car ownership. They reduce the number of cars on the road and cut down on our carbon footprint which can only be good news."

The benefits of using a Car Club vehicle include:
   reduced congestion, as 18% of drivers joining a car club in Scotland avoid buying a car and over 12 cars are removed from the roads for every Car Club car on street, which also helps reduce parking congestion;
   better air quality through the use of electric vehicles  studies show Car Club vehicles are 37% less polluting than the average public-owned car;
   increased use of public transport and active travel modes by Car Club members.

Electric vehicles fall into two categories  pure electric which take their full charge from plugging in, and plug-in hybrids which can be powered by electricity and/or another fuel. Pure electric vehicles have zero tailpipe emissions and are cheap to run, with a full charge costing around £2.50. They also have fewer moving parts, making them cheaper to service. Plug-in hybrids produce fewer harmful emissions than fossil-fuelled vehicles.

Co-wheels Car Club vehicle journeys tend to be about 20 miles on average although one Aberdeen woman used a car to go on holiday to Portsmouth. A total of 52% of Car Club drivers are from general public, and the scheme is available to Aberdeen City Council staff.

More information is available from www.aberdeencity.gov.uk/electricvehicles.