The development of one of the key locations in Aberdeen city centre has been boosted today (13 April) with the news that leading UK bar/restaurant chain, All Bar One, has agreed a deal to establish its first presence in the city as part of the prestigious £107 million Marischal Square project.

In a move which will see the London-based operator occupy a 6,000 sq. ft. prime site at Marischal Square, add its third Scottish location and create new jobs when the facility opens in the summer of 2017, All Bar One joins international hotelier, Marriott, on the development’s client list. 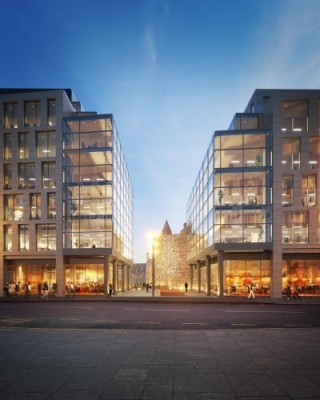 Marischal Square, on the site of the former St. Nicholas House complex, will deliver a vibrant new mixed-use quarter for the city, with the commercial and civic space project including 175,000 sq ft of Grade ‘A’ office space, the 126-bed Residence Inn by Marriot, top quality bar and restaurant space, public realm improvements, as well as a greater prominence and a £500,000 refurbishment for the 470-year-old Provost Skene’s House.

Aberdeen-based businesses have already benefitted from £15 million-worth of contracts during the early construction phase for Marischal Square including the supply of joinery, flooring, tiling, scaffolding and cleaning services, with further opportunities likely to be available around the All Bar One fit-out.

Aberdeen City Council Leader Councillor Jenny Laing said the All Bar One announcement today is also likely to be a significant boost to the drive to attract new business to the city centre area.

Councillor Laing said: “All Bar One is one of Britain’s best-loved brands and its commitment to Aberdeen’s city-centre regeneration programme is testament to its confidence in the area and the strategic value it places on our economy as we move to a new and exciting phase.

“The business has just under 50 outlets in the UK and in what is clearly a coup for the city and this will be its first in the north-east.

“It is genuinely wonderful to see Aberdeen’s part in All Bar One’s expansion and we as a local authority recognise its investment as a sign of even greater things to come as the Marischal Square development goes from strength to strength.”

Aberdeen City Council Deputy Leader Councillor Marie Boulton said: “This is fantastic news to have a major name in the bar industry opening its first outlet in the Marischal Square development.

“It is such a prime city centre location at the heart of the cultural offering and All Bar One will add to the list of national firms locating in our beautiful city.”

All Bar One, one of Mitchells & Butlers brands, has 50 stylish city bars in central locations across the UK and Mark Millett, Retail Director for the All Bar One brand, said the company was delighted to be in a position to extend its Scottish presence to four bars (currently two in Edinburgh and one in Glasgow) and to include Aberdeen for the first time.

“All Bar One are continuing with its plans to open a new bar and restaurant at the Marischal Square complex in Aberdeen. We are delighted that development work on our new bar/restaurant will begin shortly and we anticipate that we will be opening the new All Bar One at the end of August, 2017.”

Urban regeneration and property specialist Muse Developments is delivering the project with partners Aberdeen City Council and Aviva Investors and senior figures believe the deal is likely to play a significant role in attracting further businesses to the city centre location which remains on time and on budget for the 2017 opening.

Regional director, Scotland, Stephen Turner, said the agreement highlighted the role Marischal Square could play in bringing jobs and extending the night time economy in one of the most important city centre locations in Aberdeen.

“At a time when the Aberdeen and north-east economy is under pressure, the news that All Bar One has confidence in the city as well as Marischal Square’s potential to help the area respond positively from the oil sector downturn has to be welcomed by all involved,” he added.

“We believe Marischal Square has the potential to make a positive long-term impact on the local economy and this is another early example of that happening and new jobs being delivered right in the heart of the city. Remember, we are still more than a year from the development being opened and so to have two high profile tenants at this stage is extremely encouraging.

“It is vital that Aberdeen has the right mix of office and commercial space to respond positively to opportunities as the city reacts to the challenges posed by the recent job cuts and the fact that we have been in a position to align that ambition with the views of those living and working in the city is a testament to the strong working relationship we have with the Aberdeen City Council and Aviva Investors teams on the project.”

Commercial property experts at CBRE and Ryden are working with the Muse team to highlight the opportunities at Marischal Square to a range of UK businesses.

Marischal Square is currently more than half way into the development’s 116-week construction programme.