The Academy of Urbanism has celebrated the inclusion of Union Street in its new book Urbanism with a launch event hosted by Aberdeen City Council.

The book showcases “Great Places” across the UK, Ireland and Europe, exploring the key attributes to their success – in Union Street’s case, the boldness of the concept and the way the new road made sense of a “hopelessly cramped medieval city”.

Lord Provost Barney Crocket, a member of Aberdeen City Heritage Society, said: “We were delighted to welcome the Academy of Urbanism to our city for the launch of its new book.

“Union Street, as we know, is admired far and wide, and loved by those who love this great city.

“Under the City Centre Masterplan we are enhancing our heritage as well creating the conditions for continuing prosperity, and the blueprint offers us a chance to show we have the same vision and drive of those who made Union Street happen.”

Phase 1 has included the upgrading of street furniture, two deep cleans, and the creation of a dedicated team to keep the thoroughfare in top condition.

The Masterplan vision includes bringing back into use more vacant and underused historic buildings on Union Street, with improved public realm and pedestrian priority between Bridge Street and the Castlegate in the longer term.

Union Street – described in Urbanism as a “thing of wonder” – was a finalist in the Academy’s Great Street award in 2011, the Academy praising its role in the economic, social and civic life of Aberdeen. 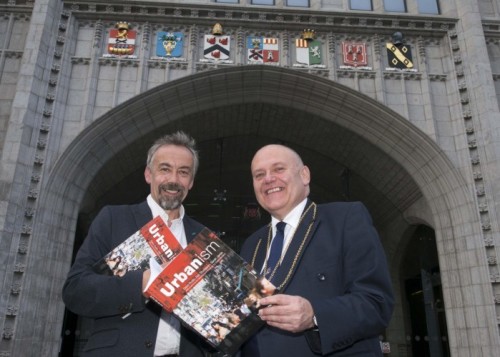 Co-author and AoU chairman David Rudlin (above, left, with Lord Provost Barney Crocket), who introduced the book at the Marischal College launch, said: "The Academy has really enjoyed reconnecting with Aberdeen and finding out what has been taking place in Union Street in the years since we visited.

“We were therefore particularly keen to hear more about the City Centre Masterplan and the positive impact this is having on Aberdeen."

The book compares the challenge of constructing Union Street on a viaduct to building “a street of granite in the sky”. But go ahead it did, offering “a grand statement of the civil and commercial power of the emerging city”.

Urbanism concludes: “The trials and tribulations of the city fathers 200 years ago have bequeathed us as a street that is as grand an urban set-piece as anywhere in Europe. Over time it will and must evolve but its granite stones will endure.”

Operation Union Street Rejuvenation is being co-led by Aberdeen Inspired, the operator of the Business Improvement District.

Adrian Watson, chief executive of Aberdeen Inspired, said: "We're very proud of Aberdeen city centre and the fascinating history of Union Street which has been highlighted in Urbanism.

"The Granite Mile is the jewel in Aberdeen's crown and we've been working with our partners to bring back its sparkle through the City Centre Masterplan's wide ranging improvement works.

"The project will have a transformational impact on the city as its transition to a more varied economy continues and Aberdeen bounces back from a challenging operating environment."

The next phase of Operation Union Street Rejuvenation will include repairing and preserving key buildings on Union Street as part of a Conservation Area Regeneration Scheme, the Council having secured and matched an award of £1.2 million from Historic Environment Scotland.