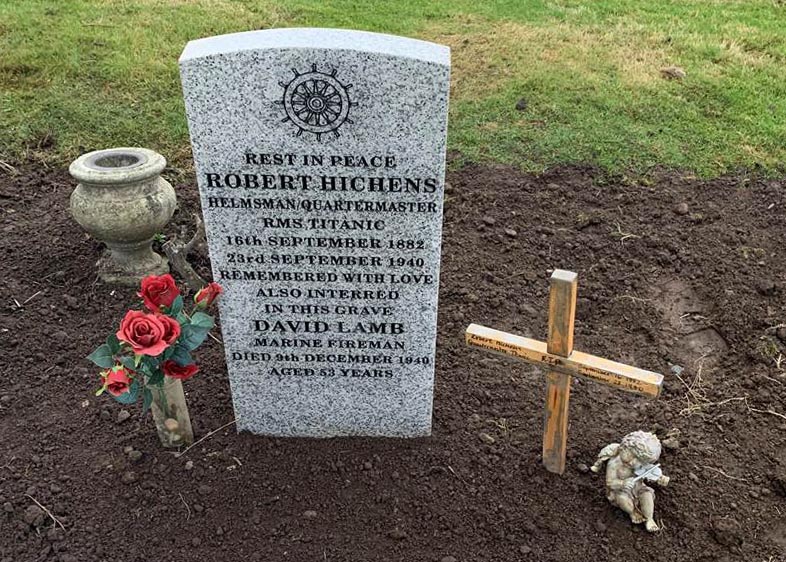 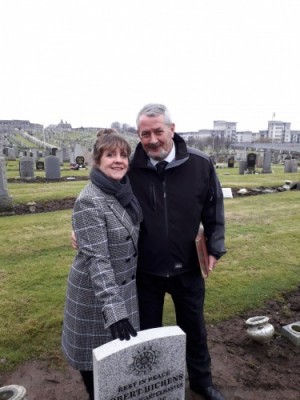 The family of a survivor of the RMS Titanic disaster gathered today (Thursday 19 December) to unveil a memorial commemorating his final resting place in Aberdeen; thanks to the detective work of an Aberdeen City Council employee.

Cornishman Robert Hichens was helmsman and one of six quartermasters on the legendary liner’s ill-fated maiden voyage from Southampton to New York in in 1912.

His character was tarnished by the event and the ensuing controversy surrounding his role in the disaster but Robert’s great granddaughter Sally Nilsson, who unveiled the plaque, has fought tirelessly to help redeem his reputation and wrote the book The Man Who Sank Titanic: The Troubled Life of Quartermaster Robert Hichens.

During her research for the book, Sally discovered that Robert might have been buried in one of Aberdeen’s cemeteries. Enlisting the help of Ian Burnett, Bereavement Services Officer for Aberdeen City Council, they were able to search records to track down Robert’s final resting place in Trinity Cemetery.

Sally was excited by the unveiling after what she described as a “long road” to today’s ceremony. Sally said: "For over one hundred years no-one knew where the last man at the wheel of Titanic was buried. Two weeks before the 100th Anniversary I found out with the help of Ian Burnett.

“Robert Hichens was one of the most important witnesses on that fateful night. He went on to serve in World War I and was part of the vital convoys as Third Officer on the merchant ship SS English Trader during the Battle of the Atlantic in World War II. We are all very grateful for everyone who have made this special day possible. Thank you from the bottom of our hearts”

Ian said: “It’s been an honour to help Sally and her family find the grave of her great grandfather and help provide a lasting memorial at the actual place where he was buried with the help of colleagues in the Commonwealth War Graves Commission.

“We are particularly indebted to Barry Mackland of Memorial Specialists Aberdeen Limited for his marvellous and generous gesture of providing the memorial to Robert Hichens and David Lamb, who is also buried in the plot, completely free of charge”.

The Commonwealth War Graves Commission also helped with the installation of the memorial. Iain Anderson, the Commission’s regional manager for Scotland, said: “This fascinating story of marking the grave of one of the RMS Titanic’s helmsman started for CWGC when we were asked to help replace the headstone of a Dutch sailor buried in the same grave as him.

“It’s always rewarding to see how much small acts to remember those who passed mean to families today. This was a joint effort and we were pleased to be able to help in our own small way.”