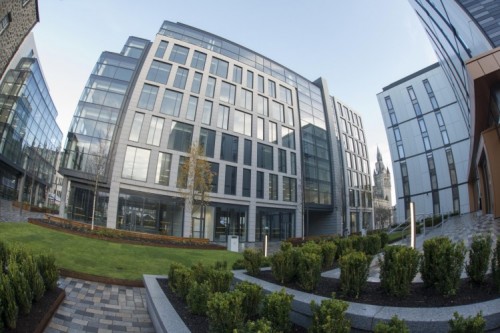 Marischal Square has been recognised as one of the best developments in Scotland after judges named it Regeneration Project of the Year at the sixth annual Scottish Property Awards (SPA).

A panel of 21 leading commercial property experts from across the sector reviewed the entries from a record 60 projects and organisations. Marischal Square was described as a very strong entry demonstrating its success in transforming the area while generating positive economic and social impact.

Marischal Square was up against projects which included the redevelopment of Dundee Station, the North Pier Harbour Building in Oban and The Registers in Edinburgh city centre.

Councillor Marie Boulton, Aberdeen City Council’s City Centre Masterplan spokesperson, said: “This award recognises the positive impact Marischal Square has had on the city centre. It has breathed new life into the area, created new jobs and is making a valuable contribution to civic life.

“The development has been successful in generating footfall in the east end of the city as the public embrace the new leisure opportunities. Marischal Square is part of the wider ambitions of the City Centre Masterplan.”

The project has transformed a key location at the heart of Aberdeen, creating a vibrant new mixed-use quarter which includes Grade A office space, a hotel, cafes, restaurants and civic space, along with public access, landscaping and public realm improvements.

Muse Developments Director, Scotland, Steve Turner, heralded the SPA success as a major accolade for the development. He said: “This award is fantastic recognition of everything we have achieved at Marischal Square to date.

“Tenants now include a diverse mix of international, national and local companies who were attracted to a first-class development that is making a significant contribution to transforming the city centre and making it a place where people want to work and relax.”

Marischal Square was named 2018 Commercial Development of the Year at last year’s Scottish Property Awards when judges described it as a “superb use of space and a major contribution to the future success of Aberdeen”.