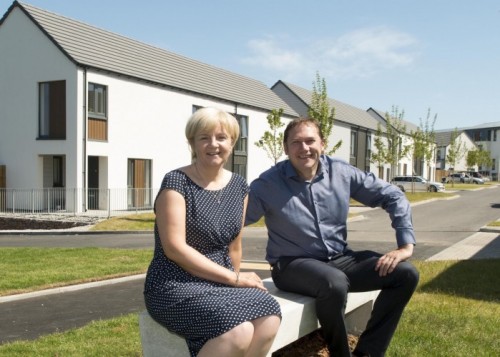 A 99-home development of council houses has been completed as part of Aberdeen City Council’s programme of investment in new homes.

The £13million site at Smithfield features 42 three and four-bedroom semi-detached properties and 57 one and two-bedroom apartments.

The final phase has now been handed over by contractor CHAP Construction to the Council and new tenants are beginning to move in. The first Smithfield residents received their keys in 2017 as the initial phase was completed.

Within months work at the nearby Manor Walk site will also be completed, providing 80 additional council houses.

Cllr Laing said: “This week is an important milestone for Aberdeen City Council, with the ambitions for the Smithfield site realised. What was a vacant piece of land has been transformed to provide much-needed housing and is already thriving as a new addition to a well-established community.

“I know from speaking to residents that the approach to the design and construction has been welcomed by tenants and these properties will make a real difference to the lives of those who can now call Smithfield home.

“With Manor Walk also moving into its final stages, investment in excess of £26million across the two sites is helping to meet the challenges we face in the city’s housing market.”

The Council is currently developing plans for the delivery of a further 2,000 new council homes after setting its 2018/19 budget priorities earlier in the year. Self-financing business plans, in conjunction with private developers, working within an affordable capital investment sum of £250m, will be brought back for councillors to consider.

Cllr Lumsden said: “The completion of Smithfield underlines the Council’s commitment to bringing new houses on stream in Aberdeen and it is very satisfying to see the programme building momentum, with Manor Walk also taking shape.

“Boosting the supply of council houses and affordable housing is a key priority and we are prepared to innovate as we move forward. Working in partnership will be essential to meeting our ambitious targets and we look forward to progress with the plans announced in the budget.”